Concord, NH — Today, health advocates and consumers joined Rep. Annie Kuster (NH-02) and Protect Our Care NH to discuss the House passage of the Build Back Better Act, the most significant expansion of affordable health care since the Affordable Care Act. 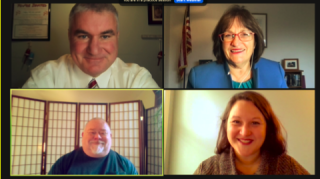 Kuster emphasized the scope of the pending legislation which includes measures to strengthen American health care, lower insurance premiums, give Medicare the power to negotiate for lower drug prices, expand affordable coverage to millions by closing the Medicaid coverage gap, expand Medicare benefits, and invest $150 billion in home care for seniors and people with disabilities.

“The Build Back Better Act is a once-in-a-generation investment in the well-being of our nation, including the future of our health care,” said Rep. Kuster. “It is essential that every Granite Stater has access to affordable, quality health care, and the Build Back Better Act brings us closer than ever to making that goal a reality by closing the Medicaid coverage gap to help millions of Americans gain health insurance, as well as extending the American Rescue Plan’s health insurance premium reductions through 2025. That means 19,000 uninsured people could gain coverage right here in New Hampshire, and nearly 24,000 could save hundreds of dollars on average per year. This transformative legislation reflects the needs I hear from constituents across my district, and I urge the Senate to take immediate action to get this plan over the finish line.”

Kuster noted that the health care measures provide coverage for millions of families and lower health insurance premiums for more than nine million Americans who buy health care on their own. She and other advocates noted that the Medicaid coverage gap is a vital step by Congress to reduce racial inequities in health care, and that the expansion of hearing benefits in Medicare and investing in home care will significantly improve the health and well-being of seniors and people with disabilities nationwide.

Advocate Lucy Hodder, Director of Health Law and Policy programs for the UNH Franklin Pierce School of Law, focused on the Build Back Better Act’s role in managing the cost of prescription medications. “We have been fighting for so long to bring some sanity to prescription drug prices,” said Hodder, citing the daily choices people are forced to make between food, shelter and medications when prices for insulin and other critical prescriptions are beyond their reach. “This bill will make a big difference.”

Allowing Medicare to negotiate the costs of medications is the result of a long battle, said Zandra Rice Hawkins, founding Executive Director of Granite State Progress and Granite State Progress Education Fund. “The drug-reform piece is so critical...American pay three times as much as others in the world [for prescriptions] and that is just unacceptable . This will allow Medicare to negotiate prices for the most widely used drugs, including insulin.” This part of the Build Back Better Act “overturns something that should never have been allowed,” she said.

Two consumers spoke eloquently of the need for the provisions of the Build Back Better Act.

“We’re in the group of people who can afford to pay our bills but are then left with almost nothing” after a serious illness, said Mike Castaldo of Dover. Castaldo said he and his wife are grateful to have health insurance through her job, but added that following his open-heart surgery, “we still spend the equivalent of the cost of a mid-size car” in a year. “We’re pretty much used as a cash register by the healthcare system,” Castaldo said.  “There is a lack of ability to know the prices of care up front and the costs are really out of control.” The changes in the Build Back Better Act will benefit everyone in New Hampshire, he added, including the middle class as well as the poor.

Ianna Zoda, the mother of three children and a student, weighed in on the value of the enhanced Child Tax Credit in the Build Back Better Act. The support she receives helps her pay for utilities. “It is keeping my house warm for me and my children,” she said. “With less stress about our housing, I’m able to go back to school. This support is extremely helpful for a lot of families.”

You can watch the event here, and learn more about how the Build Back Better Act will strengthen health care here.