Concord, NH — Today, a group of New Hampshire citizens joined Senator Tom Sherman and Protect Our Care NH for a virtual forum to call on Concord and Congress to take action to lower the high cost of prescription drugs in the Granite State, where women have been disproportionately impacted by high prescription drug costs.

Women are more likely than their male counterparts to use prescription drugs. Economic and social inequality leave women with lower pay and less wealth, making it harder to afford health care. Women are also more likely to be caregivers, leaving them responsible for purchasing medications for family members. As a result, women are more likely than men to skip needed prescriptions because of cost. This problem is only getting worse: A 2019 Gallup poll found that the gender gap for prescription drug affordability is growing, with 28 percent of women unable to afford a prescribed medication in the previous year, compared to 18 percent of men.

Real reform to lower prescription drug costs remains a priority for NH residents and patients across the country. New polling shows that after addressing COVID-19, the top issue for voters is lowering health and drug costs, and 93% support giving Medicare the power to negotiate with drug companies for lower prices.

In 2019, House Democrats passed the Lower Drug Costs Now Act (H.R. 3) to give Medicare the power to negotiate for lower drug costs — the single most effective measure to bring down drug prices. In April, House Democrats reintroduced this legislation, giving Congress another opportunity to lower prescription drug costs, and meet the demands of voters.

Senator Tom Sherman, who represents Senate District 24, said ““There is a  disproportionate impact on women for affordability. And, with the impact of COVID disproportionately on women, the issue is compounded. The specific issues impacting women on purchasing prescription drugs, for themselves and their family, needs to be a focus.”

Kayla Montgomery, of the Planned Parenthood of Northern New England Action Fund, said “This is the most regressive budget this state has ever seen, and these politicians believe they know better than medical experts. Across this country this year alone abortion restrictions. We cannot live in a state where zip code and class impact how much care they receiveThey are prioritizing stripping affordable healthcare.”

Stacey Smith of Rye added, “I had to figure out how I was going to get my coverage, it was a nightmare. I’m paying them a ton every month, now I'm paying more out of pocket, and I went to pay prescriptions, they had jumped to $200 per month.”

Jayme Simões, Protect Our Care NH State Director said, “Prescription drug use is more prevalent among women. More than half of women take prescription medication, making drug costs a regular stressor for millions. With age, medication use increases, disproportionately impacting women who live an average of five years longer than their male counterparts.”

According to the National Library of Medicine, per capita prescription drug spending in the United States is greater than that in all other countries, and in recent years the rise is far beyond the consumer price index. The root is government-granted drug manufacturer monopolies - and the cost to the economy is huge. Prescription drug spending by Americans increased by 5.7% to $369.7 billion in 2019.

You can watch the press conference here, and learn more about how the Lower Drug Costs Now Act (H.R. 3) will make prescription drugs more affordable for women in the Granite State. 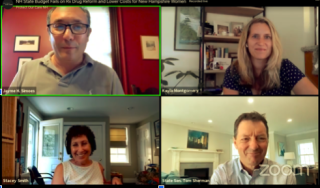 Posted at 11:49 AM in Community/Civic Involvement, Health | Permalink