“We are really so grateful for how hard everyone has worked and how the Garland Mill team has coordinated all the moving pieces,” said Julie Renaud Evans, program director for the Northern Forest Center, which owns the building.

The non-profit Northern Forest Centerpurchased the 11,000-square-foot building on Main Street in 2018 as part of its Community Investment work. The renovation will create retail space on the first floor and apartments on the second and third floors, supporting Lancaster’s role as an economic hub for the North Country. The building is listed on the NH State Register of Historic Places. 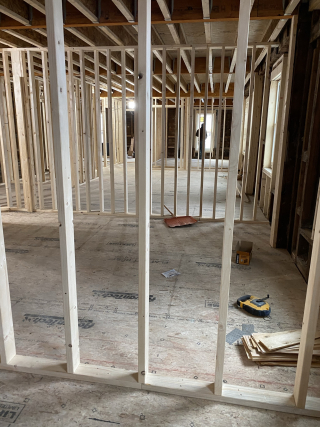 “Like most renovation projects, we found some surprises,” said Evans. “We discovered some old fire damage in the rafters and determined we needed a full foundation under the back end of the building.”

The date of the fire is unknown, but it charred beams on the second floor. HEB Engineers prescribed reinforcements to eliminate any possible problems in the future, and Garland Mill and Canton Construction quickly put the reinforcements in place.

The other big surprise was that the rubble foundation at the east end of the building could not be stabilized enough to be used. With fall temperatures dropping quickly, Garland Mill, which is managing the project for the Center, raced to pull together designer Stuart Anderson of Alba Architects, HEB Engineers, excavator Dave Chessman of Lancaster, and concrete contractor Bob Barnes to plan and construct the new foundation.

“We used steel beams to lift the east half of the building,” said Southworth, “then had to excavate the dirt and rubble foundation so we could pour concrete frost walls and put the building back down. We had to move fast because it’s difficult to pour concrete in cold weather.”  The town assisted and closed Bunker Hill Street on a Saturday so that Geddy’s Building Movers could install steel I-beams and cribbing to jack up the building.

Over the next month, the team poured the footings, slab and frost walls and Geddy’s removed the I-beams and cribbing in early December. “It was really great teamwork,” said Renaud Evans. “We had to get it done fast before it got too cold, and we did it!”

The old foundation held another surprise: Chessman turned up an intact ceramic bottle from six feet below the road grade while he was digging footings for the north frost wall. “We thought we’d already found all the architectural salvage on the site, but then we found this cool bottle,” said Southworth. “I couldn’t believe it was in one piece. In the construction world, we say Dave has ‘soft hands.’ There aren’t many excavators who could have gotten that bottle out in once piece.”

Greg Mitchell and his team from Commonwealth Construction of Lancaster installed structurally insulated sheathing and the historically accurate Pella windows in the front half of the building, while Cantin Construction of Northumberland framed the west apartments on the second and third floors. Sheathing and window replacement continues now that the new foundation is complete.

Cantin Construction will begin framing for the first floor, where Taproot Farm & Environmental Education Center, a Lancaster nonprofit, will move in the spring to provide more space for its food hub and gleaning program. 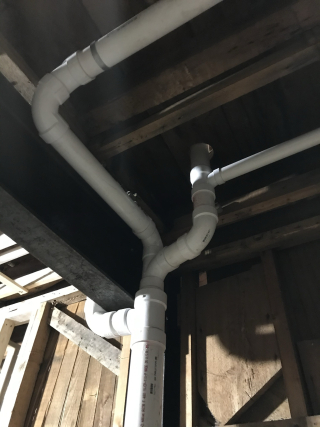 The Center has secured significant financing for this $2.9-million project, including a mix of tax credits, public and foundation grants, charitable gifts and impact investments. Based on funds raised to date, $100,000 or 3 percent of the funding is from federal sources; $2.8 million or 97 percent is expected to come from non-federal sources.

The Center’s Lancaster Main Street Fund is attracting investors who want to put their money to work to benefit the community while also receiving a financial return on their investment. For opportunities to support the project, please contact Lila Thorne at 603-933-2159 or lthorne@northernforest.org.

The Northern Forest Centeris a regional innovation and investment partner creating rural vibrancy by connecting people and economy to the forested landscape.