Concord, NH — This morning, Rep. Chris Pappas joined legal and medical experts for a virtual press conference to discuss how the lawsuit before the Supreme Court to eliminate the Affordable Care Act would devastate Granite Staters and rip health care coverage away from millions of Americans in the middle of a public health emergency made worse by the Trump administration's failure to confront the crisis head-on. 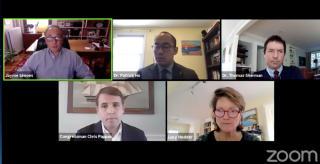 Today, just one week after the presidential election, the Supreme Court hears oral arguments in the Republican lawsuit to eliminate the Affordable Care Act. If Republicans succeed and the ACA is overturned, Granite Staters with pre-existing conditions, including those who have survived COVID-19 and are suffering long-term health consequences, could once again be discriminated against by insurers and lose access to affordable health coverage. More than 100,000 Granite Staters would lose health care through the ACA, over 350,000 Granite Staters with pre-existing conditions would see higher premiums, and everyone would lose access to basic preventative care at no cost.

Congressman Chris Pappas said “It is never acceptable to play politics with the health and well-being of our families and neighbors, but doing so during a global pandemic is not only wrong, it’s immoral and deadly,” said Congressman Pappas. “As the Supreme Court begins to hear oral arguments today in a case that could overturn the Affordable Care Act and deny coverage to Granite Staters, we must stand together and defend health care from continued political attacks.”

He continued “I have always fought to protect and strengthen access to health care, and this fight takes on a new urgency given the public health crisis we face. I will continue to support legislation that lowers premiums, strengthens patient protections, and cracks down on junk plans that could send New Hampshire families right into bankruptcy.”

Lucy Hodder, director of health law and policy programs at the University of New Hampshire, said “Everyone knows what is the threat in this case, the argument is a real stretch, but we don’t know what will happen. Many of us thought that question before the Court today was already answered back in 2012. Losing the ACA would be unthinkable, and states are saying if you undermine the ACA in a pandemic, there will be chaos. ”

Dr. Patrick Ho, President of the New Hampshire Psychiatric Association, said “The ACA has been instrumental in expanding coverage and access for Americans seeking healthcare, particularly mental health care. Our system is ill-equipped to respond to the growing mental health needs within our communities in the face of COVID-19, and this will only become more difficult without the ACA.”

Sen. Thomas Sherman, New Hampshire State Senate’s only physician, said “In my experience both as a doctor and as a legislator, both in the NH House and Senate, the ACA represents the single most important Congressional action impacting my patients and constituents.  While the Supreme Court decision could at the very least disrupt access to commercial health insurance, the most profound impact will clearly be on those covered under Medicaid Expansion. This program has brought hundreds of millions of dollars in federal support with a 90/10 percent match with state funding, serving as the foundation for New Hampshire’s response to crises in mental illness and addiction, and providing comprehensive care for more than 100,000 NH residents since its inception. For the sake of NH patients, residents and the state’s fiscal stability, especially in the midst of the COVID-19 pandemic, we need to continue to fight for this critical program.”

Jayme Simões of Protect Our Care NH said, “A lot is on the line. If the Supreme Court overturns the entire Affordable Care Act, ending its protections for millions with pre-existing conditions and ending affordable, comprehensive healthcare for millions more during a raging pandemic, the results will be disastrous. The stakes for health care couldn’t be higher, it could throw the entire American healthcare system into chaos - just we are seeing hospitals fail and merge, cost would be driven up, and care would become more expensive for all. This potential tragedy will be the lasting legacy of the Trump Administration.”

In a written statement, U.S. Senator Maggie Hassan said, “This Republican-led court case could determine whether millions of Americans lose their health care coverage, along with protections for people with pre-existing conditions. All across New Hampshire, I have heard from Granite Staters who are terrified of what would happen if this case is successful. In the middle of a public health crisis that has only gotten worse, it is unfathomable and dangerous that Republican Attorneys General and the current administration continue to push this case through the courts and jeopardize Americans' health and well-being. I hope that the Supreme Court will once again uphold the legality of the Affordable Care Act, and that Congress and President-Elect Biden work across the aisle to improve Americans' access to quality, affordable health care coverage.”

You can watch the event here, and learn more about how the Trump-Republican lawsuit to eliminate the Affordable Care Act would devastate Granite Staters here.