Home Archives Subscribe
Rep. Pappas Co-Sponsors Resolution to Protect Millions From the Trump Administration’s Push to Terminate the ACA in the Middle of a Pandemic
BREAKING: SCOTUS to Hear ACA Arguments One Week After Election

NEW AD: Protect Our Care Launches New Digital Ad on What’s at Stake If President Trump’s Lawsuit Overturning the ACA Is Successful During the Coronavirus Pandemic

Concord, NH — Protect Our Care launched a new digital ad today that debuted during a health care virtual event for the Democratic National Convention. “Gone” is part of a $2 million campaign holding President Trump accountable for his failed response to the coronavirus and how his years-long efforts to sabotage the ACA have only made it harder to tackle the virus. The Trump administration is arguing before the Supreme Court in the middle of a pandemic that the entire Affordable Care Act should be struck down. If successful, President Trump would rip away health care from more than 23 million Americans and end protections for more than 135 million people with pre-existing conditions, including for millions of Americans who have contracted the virus. 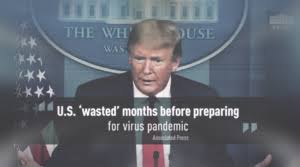 As the coronavirus health crisis rages on, Protect Our Care launched these ads to urge President Trump to end his war against health care and do more to protect Americans during the pandemic.

“Instead of showing leadership and working to protect Americans as we face a global pandemic, President Trump continues to try to rip health care away from more than 23 million Americans by pursuing a politically motivated lawsuit against the Affordable Care Act,” said Protect Our Care Chair Leslie Dach. “Getting rid of the ACA during the worst public health crisis our nation has faced in a century would be disastrous, yet Trump continues his war on health care. If President Trump is successful, tens of millions will lose the coverage and protections they need to battle the coronavirus.”

Posted at 07:57 AM in Community/Civic Involvement, Health | Permalink