Concord, NH — Protect Our Care is releasing a new paid digital ad today to mark the three-year anniversary of Senator John McCain’s “thumbs-down” vote to block Senate Republicans’ effort to repeal the ACA in the early morning hours of July 28, 2017. A seminal moment for Americans’ health care, McCain offered Republicans a chance to chart a different course from their relentless quest to repeal the law. But instead, under the leadership of Donald Trump and Mitch McConnell, they chose to double down on their repeal at all costs approach even as the nation faces the worst public health crisis in a century. The ad recognizes this important moment by calling attention to the fact that President Trump along with Republican Senators like Cory Gardner (R-CO), Thom Tillis (R-NC), Steve Daines (R-MT) and Martha McSally (R-AZ) continue to support repealing the health care law. The ads will target persuadable voters on digital platforms in AZ, CO, NC, IA, MT, WI, MI, PA and MN. 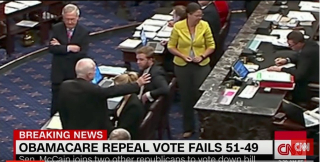 Later today at 6:00 PM EDT, Protect Our Care will host a virtual town hall to commemorate the third anniversary of Senator John McCain’s historic thumbs-down vote that will feature Senators Debbie Stabenow (D-MI), Bob Casey (D-PA), Amy Klobuchar (D-MN) and Tammy Baldwin (D-WI) along with health care advocates who have been instrumental in the fight against repeal.

“Senator McCain’s vote three years ago should have been a wake up call for the Trump administration and Republicans to stand down from their relentless efforts to tear apart the ACA, yet their war on health care has only continued to grow more destructive,” said Protect Our Care NH Director JH Simoes. “The Trump administration and Republicans including Senators Gardner, Tillis, Daines and McSally are hellbent on repeal and still have no replacement and no plan for the more than 20 million Americans who receive coverage under the ACA nor the 135 million Americans with pre-existing conditions who are protected under the law. As the nation faces a deadly pandemic that tests our health care system and threatens the health and safety of every American like never before, it’s unconscionable that Trump and Republicans are still plowing ahead with their efforts to take away health care.”

Reporter: After several years trying to repeal and replace Obamacare, it came down to just one vote, John McCain’s.

Reporter: Senator McCain, just days removed from his cancer diagnosis, stunning the chamber, turning the thumb’s down on the repeal bill.

Republicans have tried to dismantle our health care dozens of times…

And Arizona Senator Martha McSally said let’s “get this f***ing thing done” when calling for repeal.

Now we are in the middle of a pandemic and President Trump and Republicans are back. again…

Continuing their relentless quest to repeal the Affordable Care Act which provides coverage for more than 20 million Americans and protects over 135 million Americans with pre-existing conditions. It’s reckless and dangerous, especially in the middle of a pandemic.