LISTEN TO THE FULL RECORDING HERE

Concord, NH -- Today, Protect Our Care New Hampshire hosted a roundtable discussing the potential impact on Granite Staters of the Trump Administration's recent filing to the U.S. Supreme Court to strike down the Affordable Care Act. If successful, the lawsuit against the ACA could cost more than 100,000 New Hampshire residents their health care in the middle of a pandemic which has taken the lives of almost 400 Granite Staters. Protect Our Care was joined by a physician, a worker in the hospitality industry, and a student to discuss the latest steps in President Trump's efforts to eliminate the Affordable Care Act. 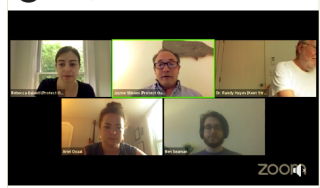 On June 25, the Department of Justice and Republican-led states filed their briefs in the Supreme Court lawsuit to repeal the law and take health care away from thousands of New Hampshire residents. Meanwhile, Democrats like Rep Annie Kuster and Rep. Chris Pappas filed briefs opposing the lawsuit in May, and House Democrats introduced new legislation last week to strengthen the ACA. Oral arguments in the case are expected in the fall of 2020.

Dr. Randy Hayes of Concord said, “The Affordable Care Act has improved the lives of nearly every child and adult in New Hampshire. When the ACA became law, it not only offered specific insurance plans to some through the exchange plans and Medicaid expansion, but also set out to radically improve what most health insurance companies were required to provide to their customers. During the Covid-19 pandemic and economic recession, it makes no sense for our leaders to ask us to give up all we have gained from the Affordable Care Act. Instead, we should build upon the successes of the ACA as we move towards providing affordable, accessible health care to our entire population.”

For Seacoast resident Ariel Oxaal, who works in the hospitality industry, said, “ For me upon graduation, I did not have the opportunity to get health care at work, so I signed up for the ACA, allowing me to get preventive health appointments and care. Now, especially in the time of COVID-19, the ACA is so important for people in New Hampshire. The travel industry is our state’s third largest employer, so many people are now out of a job and have lost health insurance. To not have the opportunity to sign up for the ACA would be so detrimental to so many workers.”

Ben Seaman, a university student, said, “Like millions of young adults in America, my health insurance coverage depends on my parents and their employment status. With this pandemic causing a record rate of unemployment, the physical and fiscal health of families nationwide is at risk like never before, and repealing the Affordable Care Act now will leave hundreds of thousands of Americans without coverage at a time when accessible healthcare is more essential than ever.”

“Simply put, there has never been a more important time to protect and expand American’s health care, and never a worse time to take it away,” said Protect Our Care New Hampshire State Director Jayme H. Simoes. “As the Trump administration presents its case for removing health care from millions of Americans, the New Hampshire delegation is doing the opposite: working to improve and expand coverage, strengthen protections for pre-existing conditions, and get more Americans covered during this public health crisis.”

You can watch the roundtable here.