Five Years Ago Today: Trump Descended Down His Golden Escalator and Vowed to Drag American Health Care Down With Him

Washington, DC — Five years ago today Donald Trump descended down his golden escalator at Trump Tower and in his first ever presidential campaign speech vowed to take American health care down with him. In the years following, President Trump has worked tirelessly to fulfill his pledge to rip health care away from Americans by trying relentlessly to overturn the Affordable Care Act (ACA) and take coverage from 20 million Americans and protections for 135 million with pre-existing conditions. Five years later, President Trump is still waging his war on Americans’ health care as the nation struggles in the midst of the coronavirus pandemic. In response to this fateful anniversary, Protect Our Care Executive Director Brad Woodhouse released the following statement:

“Five years ago today Donald Trump descended down his golden escalator and vowed to rip apart American health care. Candidate Trump’s first campaign speech told Americans all they needed to know about the threat that President Trump would pose to their health care. In the years since, Trump has remained dead-set on destroying health care by trying time and again to overturn the ACA and take health care from 20 million Americans and protections for 135 million through both Congress and the courts. And while America’s health care system is still standing, President Trump has caused millions of Americans to live in constant fear of having their health care taken away, and has succeeded in making coverage less affordable and accessible all while lining the pockets of insurance companies 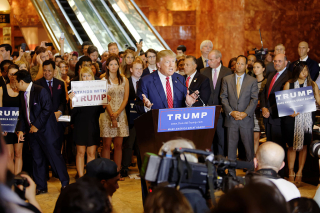 with massive tax breaks as they raise costs on Americans. President Trump’s disastrous agenda has been made worse by his failed response to the coronavirus which has shown just how destructive his years-long war on health care has been for Americans.

“Our country cannot afford another four years of Donald Trump’s disastrous health care agenda. The America we have today is defined by one act of Trump’s sabotage after another, and while this is no anniversary to celebrate, it’s a stark reminder of the existential threat of Trump’s war on health care, especially as the nation grapples with the worst public health crisis in a generation.”