This week, Protect Our Care hosted press calls and digital events across the country with elected officials to bring attention to the Trump-Republican lawsuit to overturn the Affordable Care Act (ACA) and discuss the briefs from Senate Democrats and other groups filed Wednesday in the Supreme Court. During press events with attorneys general and elected officials in Colorado, Maine, Michigan, Minnesota, New Hampshire and Wisconsin, Democratic leaders described the damage of this lawsuit which if successful would rip health care from 20 million Americans and throw the health care system into complete chaos as the country grapples with the coronavirus pandemic.

Protect Our Care also hosted a national press call Wednesday with Senate Democratic Leader Chuck Schumer, former HHS Secretary Kathleen Sebelius and Visiting Lecturer in Law at Yale Law School Andy Pincus, who made clear the devastation that would ensue if health care is ripped away from 20 million Americans as well as protections for 135 million with pre-existing conditions at a time when ensuring people’s health has never been more important.

POC also hosted a call on Tuesday with Senator Chris Murphy and Little Lobbyists to discuss the real-life human impacts of the lawsuit.

A look at Protect Our Care’s activity this week:

“Now more than ever, Americans need the Affordable Care Act. And yet, in the middle of this public health and economic emergency, the Trump administration is dedicating time and resources to eliminating health care coverage and pre-existing condition protections for millions of Americans,” said Leader Chuck Schumer. “But Senate Democrats won’t give up this fight. We are calling on the highest court of the land to affirm the constitutionality of the Affordable Care Act and protect Americans’ care. The facts and the law are indisputably on our side.”

“Taking away health care from millions of Americans in the midst of a pandemic is cruel, economically stupid and dangerous,” said former HHS Secretary Kathleen Sebelius. “Despite this lawsuit — and innumerable other efforts to sabotage the Affordable Care Act — the ACA is working to make health care more widely accessible and affordable. We should be working to strengthen it, not undermine it.”

“The nearly three dozen amicus briefs that will be filed today, together with the briefs filed last week by the House of Representatives and California and the other intervening states, demonstrate that there simply are no credible legal grounds for the argument by Texas and the Trump administration,” said Andy Pincus, Partner at Mayer Brown and Visiting Lecturer in Law at Yale Law School. “These briefs also make clear the huge stakes of this case: everyone with a role in the health care system – from patient groups to health care providers to hospitals – is filing in support of the ACA. They all recognize the catastrophic consequences that would result from invalidating the ACA—and especially from doing so while the nation is fighting a pandemic.”

Listen to the call here.

“Because of the ongoing coronavirus crisis, we are approaching a 20% unemployment rate, meaning more and more Americans are finding themselves reliant on the Affordable Care Act and Medicaid in order to get themselves and their family insurance,” said Senator Chris Murphy. “And so, the number of people who are now at risk of losing their health insurance, if President Trump lawsuit is successful, is not just 20 million. It might be 25 million, or 30 million, or 35 million. The stakes are just hard to get your head wrapped around. So it makes no sense that this administration is pursuing a repeal of the Affordable Care Act without a replacement. But it makes even less sense that the administration is continuing to pursue this dangerous repeal effort in the middle of a pandemic.”

Listen to the call here. 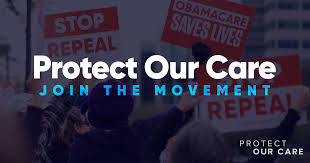 “It’s unconscionable that President Trump and Congressional Republicans continue fighting in court to eliminate the Affordable Care Act, even as we are in the midst of combating a once in a lifetime pandemic with COVID-19,” said Rep. Annie Kuster. “More than 52 million Americans and 200,000 Granite Staters live with pre-existing conditions here in New Hampshire and every single day they’re threatened by the attacks of this administration on the Affordable Care Act.”

Posted at 10:48 AM in Community/Civic Involvement, Current Affairs | Permalink