Home Archives Subscribe
In Conway, Rep. Pappas Discusses His Efforts to Defend Affordable Care Act
Cable News and Fact-Checkers Broke Down Trump’s Whoppers About His Health Care Record During the State of the Union

State of the Union Address and empty promises on health care

During the State of the Union Address this week, President Trump is sure to bolster his self-proclaimed accomplishments on a wide range of topics, including health care. Chances are, he will not propose any policies to lower health care costs and expand coverage for Granite Staters. Instead, he will likely repeat empty promises on health care, as he has been doing since before the start of his presidential campaign. 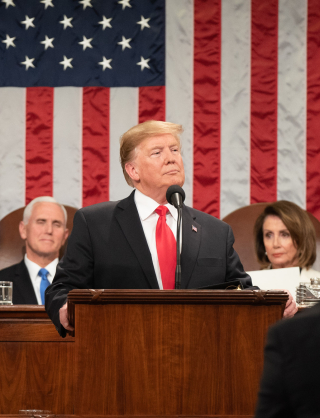 President Trump and his team are already  in deep trouble when it comes to health care this year. Earlier this month, Trump lashed out at his own HHS Secretary because of polling showing that the administration’s health care policies are unpopular among voters. He seems to be frustrated and desperate and will say, but not do, what  Granite Staters want when it comes to fixing health care.
Over the last 2 years, there has been a huge spike in drug prices. The administration response? Give drug companies billions tax breaks and oppose giving Medicare the authority to negotiate lower drug prices — the most effective solution to this problem. Though Trump has stated that “drug prices are coming down, first time in 51 years because of my administration,” the truth is that drug companies have continued to consistently raise their prices and reap the profits.
In response, Democrats have drafted ambitious bills to try and lower drug costs. The president first praised, then opposed, the bills, leaving them stuck with no GOP support. Meanwhile, President Trump has repeatedly talked about lowering drug prices by tying drug costs in the US to drug costs in other countries, but that has not happened.
On top of Trump’s refusal to lower drug prices, his administration and its Republican allies continue to undermine the Affordable Care Act (ACA). After trying, and failing, to repeal the ACA through legislation numerous times, Republicans are now focused on an ongoing federal lawsuit to overturn the landmark health care law. If the lawsuit is successful, 20+ million Americans could lose their health insurance, and 135 million Americans with pre-existing conditions, including Granite Staters, could lose access to care. Incredulously, Trump still claims he “saved” protections for those with pre-existing conditions, despite boasting about how his lawsuit would “terminate” the ACA and its consumer protections.
As the partisan lawsuit to overturn the ACA made its way through the courts, Trump wasted no time finding other ways to undermine Americans’ health care. His administration championed junk insurance, claiming that they will expand coverage to more people. In reality, those plans allow insurance companies to discriminate against people with pre-existing conditions. Expanding junk plans does nothing but harm Americans with pre-existing conditions who desperately need comprehensive coverage — something that Trump and Republicans know quite well.
These vicious attacks on American with pre-existing conditions and blatant lies prove exactly how much the president cares about providing healthcare to those in need. But that’s not all: through Trump has promised that he and Republicans will “stand for protecting Social Security and Medicare and Medicaid,” he as recently as this month, signaled he will put slashing benefits for Medicare, Medicaid and Social Security on the table in 2020 if re-elected.
Trump promised that his health care plan would cover everyone and claimed he is “far better” on health care than Democrats. But under his administration, attacks on the ACA have left 7 million Americans uninsured. Despite his many promises to release a “phenomenal” health care plan, he has yet to produce one. Polling has indicated that health care is a major topic of concern among voters and have also shown that Americans trust Democrats more than Republicans when it comes to devising healthcare plans. The State of the Union Address will be a major opportunity for the president to try to undermine the ACA, but the voters should see past the false promises.