Singer/songwriter Ken Sheldon has released Talking to My Food, a collection of fun, lighthearted tunes for the young and young at heart.

Sheldon’s first recording for kids, Ice Cream Soup, has entertained families for over 20 years. “The kids who sang on that album have all grown up, and many have kids of their own now,” says Sheldon. “So, I thought it was time to record some new tunes for a new generation.”

Included on the album are “Talking to My Food” (for those who think conversation aids digestion); an ode to a “Mud Pie”; “Meltdown,” an experience all too familiar to parents of toddlers; an update to an old tune called “Mary Had a Dinosaur”; “I’ve Got an Itch for You” by Elvis imitators Melvin and the Four Fleas; a tune for every young “Drama Queen”; a doo-wop ditty for a beloved grandmother, “Nana Lamb”; a sing-and-clap-along song called “Caleb”; the adventure of runaway goats in “Who Put the Kids in the Car?”; a love song to a “Chocolate Chip Cookie”; and two lullabies to round out the collection.

Sheldon composed the tunes on “Talking to My Food” in a wide variety of styles, from rock to country, jazz to folk.  “My goal as a children’s musician is to write songs that won’t drive parents crazy if they have to listen to them a thousand times,” says Sheldon. “So far, I haven’t lost too many friends.”

To many, Ken Sheldon is better known as Yankee humorist Fred Marple and the creator of the Frost Heaves comedy show. “Before Frost Heaves, I had a career as a children’s performer,” says Sheldon. His “Sing Along and Learn” series published by Scholastic has sold over 150,000 copies and has been used in schools around the country and in other parts of the world. 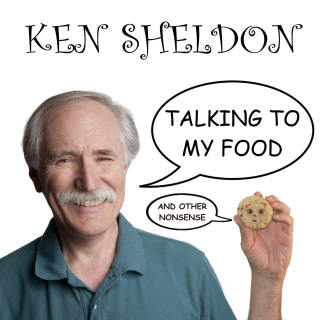 Parents and teachers have called Ken Sheldon’s music “fun, educational, and easy to move to.” “I have not seen these kids have so much fun outside of gym class!” said one teacher. Meg Chorlian, editor of Cobblestone children’s history magazine, said of Ken’s music, “They are the most-requested items in our children's music collection. His songs are irresistible!”

Talking to My Food is available for download from CD Baby, Amazon, iTunes and other outlets. CDs may be ordered at kensheldon.com/music