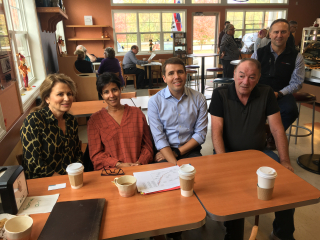 Rep. Pappas talked about his work to pass the Lower Drug Costs Now Act (H.R. 3), a bill that Democrats introduced in the U.S. House of Representatives. This legislation will drastically lower prescription drug costs and hold insurance companies accountable for price gouging.

Vilmarie Sanchez, a Seacoast resident with MS, told Rep. Pappas of the high costs of the life-saving medications she needs – some of which can cost as much as $86,000 per year. Carla Meyers, whose 30-year-old son has MS, spoke of her family’s struggles, and her concern that if the ACA were struck down, her son would no longer be able to access life saving drugs through Medicaid expansion. Larry Glynn and his daughter told the Congressman about how expensive the drugs needed to treat his diabetes are – even though they have been on the market for years.

“I am committed to working with my colleagues in Congress to lower prescription drug costs for all Americans,” Rep. Pappas said. “Nobody should have to worry about going bankrupt to access life-saving medication. We need to pass legislation immediately to lower drug costs and hold pharmaceutical companies accountable for their role in the skyrocketing prices we’re currently seeing.”

While Democrats like Rep. Pappas move to lift the ban on Medicare negotiations for lower drug prices and introduce the strongest-yet measures to hold big pharma accountable, Republicans are sticking to the status-quo and protecting big pharma’s profits.

Drug Prices Are Surging Under Trump

Drug Prices In 2019 Surged Compared To The Year Before. With Hikes At 5 Times Inflation — “More Than 3,400 Drugs Have Boosted Their Prices In The First Six Months Of 2019.” “Price hikes on prescription drugs are surging in 2019, despite vows from the Trump administration to rein in pharmaceutical costs. So far in 2019, more than 3,400 drugs have boosted their prices, a 17% increase compared with the roughly 2,900 drug price increases at the same time in 2018, according to a new analysis by Rx Savings Solutions, a consultant to health plans and employers. The average price hike for those 3,400 drugs stands at 10.5%, or about 5 times the rate of inflation, the study found.” [CBS News, 7/1/19]

AARP Analysis Found Specialty Drug Prices Have Grown More Than Three Times Faster Than Inflation. “The prices of widely used specialty prescription drugs grew more than three times faster than general inflation in 2017…The new report found that the average annual price for a single specialty drug used on a chronic basis is now nearly $79,000, compared to $27,824 in 2006.” [AARP, 6/25/19]

Insulin Costs Have Tripled Over The Past Decade. As costs continue to rise, as many as one in four of the 7.5 million Americans dependent on insulin are skipping or skimping on doses.

Despite Tough Rhetoric,  Trump And His Republican Allies Continue To Block Meaningful Reform.

Posted at 09:41 AM in Community/Civic Involvement, Current Affairs, Health | Permalink