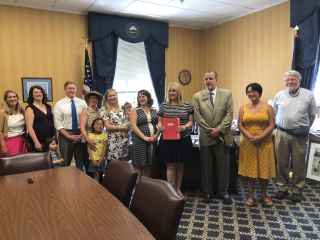 The lawsuit was filed in 2018 by 20 Republican state officials, who argued that the entire Affordable Care Act (ACA) is unconstitutional – including protections for pre-existing conditions. This past December, a conservative judge in Texas ruled in favor of the lawsuit and declared the entire ACA invalid. The suit is currently in the U.S. Fifth Circuit Court of Appeals, where oral arguments began today, July 9 in New Orleans, Louisiana.

Simultaneously, participants called on Governor John Sununu to sign SB 4, a bill to codify the ACA’s consumer protections into state law should the law be repealed at the federal level. Governor Sununu, who had previously refused to indicate his position on the bill, announced during Protect Our Care’s press conference that he would indeed sign SB 4.

Jayme Simoes, Co-State Director of Protect Our Care New Hampshire, said, “If the ACA were to be struck down, we would find that 100,000 Granite Staters would lose their coverage, and everyone that has a pre-existing condition would find that they have to pay significantly higher premiums. This is a serious issue.”

Dr. Ellen Joyce, OBGYN, said, “As a physician, I have seen first hand how the Affordable Care Act has helped members of our community get access to reliable, high-quality health insurance. Thanks to the ACA, pregnant women are ensured comprehensive prenatal care, helping to improve outcomes for women and their families. The ACA has made insurance coverage for women reliable, comprehensive, and more affordable. We must protect this life changing law for my patients, their families, and the next generation.”

Dr. Randy Hayes, a retired family doctor with the Kent Street Coalition, said, “We must build on the successes of the Affordable Care Act, and not repeal it out of hand with no sound program to replace it. As a doctor, I was able to provide better care thanks to the ACA, whether it was a free Medicare wellness visit for seniors or behavioral health services for teenagers.

In New Hampshire, we have had enormous improvement in access to care, both for mental illness and substance abuse, under the Affordable Care Act.”

Darleen Cody-Gildersleeve, a patient advocate, said, “One of my children suffered from repeated hospitalizations, so I started my own business so I could work from home. Being able to work for myself gives me the flexibility to attend to my children’s medical needs. I was only able to start my company because I was able to buy insurance on the marketplace, which became available under the Affordable Care Act. Without the ACA, we would be left in financial ruin.”