The Railway to the Moon turns 150

They said it could not be done. They called it, jokingly, a “Railway to the Moon.” But, New Hampshire’s Mount Washington Cog Railway will celebrate 150 years of doing the impossible on July 3rd. That marks the date that, 150 years ago, cog steam engines successfully reached the summit of Mount Washington, changing history forever to become the first mountain- climbing railway in the world. 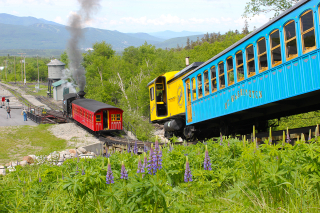 The railway’s two remaining steam engines still climb to the summit, and on July 3rd, along with a fleet of biodiesel engines, will be making 2 trips to the summit and back. While the trains are chugging up and down the mountain, there will be a day-long celebration at the Base Station,  from 11 am to 3 pm.

There will be a guest booth with goodies from Calef’s General Store, of Barrington , NH, a partner property celebrating their own 150th anniversary, as well as BBQ off the truck from Smokin’ T’s of Lancaster, NH, and birthday cupcakes by Love At First Bite Bakery of Whitefield, NH.

There will Victorian lawn games (weather permitting) and fish feeding at Peppersass Pond for kids and adults alike as well as a live acoustic guitar performance by Michael Bloom followed by fireworks at dusk by Andrew Day. Last but least, Peppersass, the engine that built the railway, starting in 1866 and finishing the job in 1869, will be at the center of it all, in full in animated glory, with a working smoke stack and whistle. 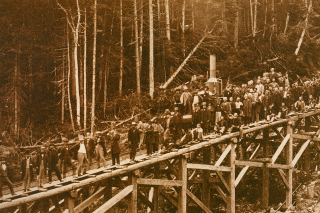 The Mount Washington Cog Railway, also known as the Cog, is the world's first mountain-climbing cog railway (rack-and-pinion railway). In the late 1850s, Sylvester Marsh had the idea to build a railroad to the top of New Hampshire’s Mount Washington, the tallest mountain in New England.   At the time Mount Washington had become famous around the world, depicted in paintings. Marsh’s idea was a stretch for the technology of the period, and was met with ridicule and disbelief from state legislators and railroad officials.  New Hampshire native, Marsh thought to build the railway after being lost near the summit of Mt. Washington. He worked to give people an easier way to visit the summit of Mt. Washington
On July 3rd, 1869, the Mount Washington Railway officially opened to the public as one of the great engineering feats of the century. This was less than two years after the golden spike had been driven, celebrating the opening of the first transcontinental railroad in America. President Ulysses S. Grant would ride on the Cog Railway later that summer.

The Cog will be offering a full train schedule to the summit and both indoor and deck seating for dining as well as gift shop on its lower level and interactive museum on the upper level. For more information about The Cog Railway or the full line up anniversary event schedule, please visit thecog.com or call 603.278.5404. The Mount Washington Cog Railway is located on Base Station Road, at Marshfield Station, 6 miles from Bretton Woods and Rte 302.