Waterville Valley, NH- U.S Ski & Snowboard has named WVBBTS/Waterville Valley Academy the 2019 Freeski Club of the year. The club of the year is presented to a U.S. Ski & Snowboard Competition Club in each sport, which has distinguished itself in providing direction to young athletes through high-level competition programs resulting in athletic success.

WVBBTS was selected not only for its success at the highest level of competition, but for the commitment to train and develop young athletes. Grace Henderson and Hunter Henderson, current WVA student-athletes were both named to the US Ski Team in 2019, while a number of others competed in the highest level of competition including Nor-Ams. Accomplishments for WVA/WVBBTS Freeski this season include two Nor-Am/Rev Tour wins, four Nor-Am/Rev Tour podium finishes, five athletes who finished in the Top 10 of the Nor-Am Tour, three World Cup starts, one Top 10 World Cup result, and two athletes invited to the Junior Worlds Championships. Additionaly, WVA/WVBBTS, in combination with Waterville Valley Resort, were recognized for holding a number of regional and national competitions throughout the year, including a slopestyle Nor-Am, once again showing a commitment to growing the sport. 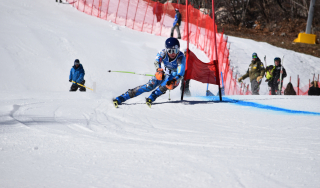 The Freeski program is headed by Program Director Dan Shuffleton and coach Matt Crowe. Their leadership and dedication to the program is outstanding and worthy of recognition. Additionally, Shuffleton has been nominated for 2019 Freeski Coach of the year by US Ski & Snowboard. Shuffleton was previously named USSA Development Coach of the Year and Freeski Coach of the Year in 2013 and 2014, respectively. The Freeski Club of the year award will be presented on May 16th, in Park City Utah at the annual USSS Congress.

Founded in 1934 , WVA/WVBBTS is committed to supporting the Motto of “Pioneering Snowsports and Cultivating Tomorrow’s Leaders” Offering both a weekend program and fulltime snowsports academy, WVA/WVBBTS is a leader in snowsports. WVA/WVBBTS is a 501c3 non-profit organization. For more information on Waterville Valley Academy or WVBBTS, vist wvbbts.org

Posted at 10:03 AM in Community/Civic Involvement, Sports | Permalink