A frequent visitor to the McAuliffe-Shepard Discovery Center, Col. Searfoss served as keynote speaker on multiple occasions, most recently for the Discovery Center’s annual aerospace festival for families, AerospaceFest, in May 2017. “Rick was inspiring and fun,” Discovery Center Executive Director Jeanne Gerulskis notes. “His stories of life as an Air Force pilot, as an astronaut living and working in space and as a test pilot for one of the first commercial spaceflight companies emphasized leadership and teamwork, in a way that was meaningful for children and adults alike. We always enjoyed his visits, and whenever we asked him to headline an event, he was here in a heartbeat.”

Born June 5, 1956 in Mount Clemens, MI, Searfoss considered Portsmouth NH his hometown. He grew up in Portsmouth, graduated from Portsmouth High School in 1974 and headed off to the U.S. Air Force Academy, where he earned a BS in aeronautical engineering, followed by an MS in aeronautics at the California Institute of Technology. He was also a graduate of the USAFSquadron Officer School, Air Command and Staff College, and Air War College. After flying the F-111F operationally and serving as a test pilot instructor at the USAF Test Pilot School at Edwards Air Force Base (CA), Searfoss was selected to join NASA’s astronaut corps in 1990.He served as a Space Shuttle pilot on his first and second missions (STS-58, 1993; STS-76, 1996) and rose to Space Shuttle Commander for his third and final mission in 1998, the Neurolab mission (STS-90), in which three of the seven crew members were from New Hampshire (Searfoss, Drs. Jay Buckey of Hanover NH and Rick Linnehan of Pelham NH). Col. Searfoss and his fellow NH crewmembers did a downlink with the Center from the Space Shuttle Columbia in April 1998, speaking with children who had visited from the three astronauts’ hometowns. 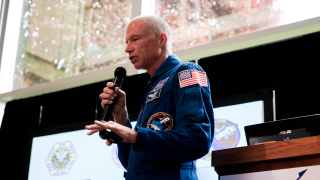 “Rick will be very much missed,” notes Gerulskis. “We had hoped for many more visits in the coming years. There are few who could match his enthusiasm for space exploration and for encouraging the next generation to pursue careers in STEM (science, technology, engineering and mathematics).  He never lectured, he engaged – completely and thoroughly.”