A major change is coming to Main Street that will contribute to the ongoing revitalization efforts in Lancaster, N.H. On Oct. 1, 2018, Parker J. Noyes Redevelopment purchased the building it’s named for: the historic Parker J. Noyes building at the corner of Main and Bunker Hill Street. The redevelopment will create new commercial space for the Root Seller Marketplace, as well as modern apartments on the upper floors.

Parker J. Noyes Redevelopment is a partnership between Lancaster businessman Greg Cloutier and the Northern Forest Center, a Concord-based regional innovation and investment partner creating vibrant communities by connecting people and the economy to the forested landscape. The developers have been encouraged by a local advisory group that identified the need to revitalize dilapidated buildings in Lancaster’s downtown.

To follow up on the advisory group’s ideas, the Center assessed Lancaster’s downtown and other market conditions and identified a need for more high-quality commercial and residential building space to house young families and professionals. The Parker J. Noyes building became a focal point for possible redevelopment due to its potential to radically transform the downtown.

The first floor of the imposing Italianate structure will become the new home for the Root Seller Marketplace, a market that provides access to healthy local foods for the greater community. "We're so excited to expand to a larger space on Main Street, allowing us to increase our offerings of both retail products and products from local farmers, food producers, and crafters,” said Melissa Grella, executive director of Taproot Farm & Environmental Education Center, the nonprofit organization that operates the Root Seller Marketplace. “This move will bring a vacant building back to life, continue to revitalize Lancaster's downtown, support the local economy, and increase awareness of and access to our local food system."

By moving just down Main Street to the larger space, the Root Seller Marketplace will be able to build a commercial kitchen and continue to expand in the future. The remaining two floors will be turned into two-bedroom residential units for young professionals and families.

“Saving old historic buildings like the Parker J Noyes Building is tough work and will have its unique challenges,” said Cloutier. “It requires a community and people willing to work together to bring life back to this stately building.” The Parker J. Noyes building is currently on the New Hampshire Preservation Alliance’s “Seven to Save” list due to the building’s historical significance.

Renovation is slated to begin this fall and will continue until the building is fully renovated. The developers said they plan to retain as much of the building’s historic character as possible in the renovation.

The Northern Forest Center has raised private investments to fund the purchase and renovation of the Parker J. Noyes building through the Lancaster Main Street Fund, which the Center established in 2018. The fund is attracting investors who want to put their money to work doing good things for the community while also providing a financial return.

“Our investors want their money to leverage new energy and vibrancy in Lancaster’s downtown,” said Rob Riley, president of the Center. “We’ve seen how quality redevelopment of important buildings can help communities turn a corner and how one project quickly leads to other enhancements.”

According to Riley, the Lancaster Main Street Fund will repay its investors over five to seven years. He said the developers expect to sell the renovated building in about 10 years to generate funds to repay the initial investors.

Commercial and residential renovations inside the Parker J. Noyes historic building will help bring an important piece of Lancaster’s history back into the public spotlight. To learn more and follow updates on this project, please visit www.nfcenter.org/parkerjnoyes 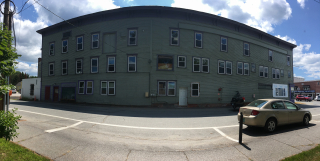 Posted at 02:45 AM in Business news, Community/Civic Involvement | Permalink