Warner NH – When someone calls the Telephone Museum and asks you if they could donate an old telephone truck to your collection, you say YES without hesitation! That is just what happened at the New Hampshire Telephone Museum when brothers Gregg and Eric Haskin, President and VP-Network Operations of the Waitsfield and Champlain Valley Telecom in Waitsfield VT, made the call. 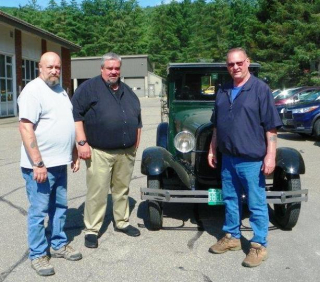 The Haskin brothers are carrying on the tradition of their parents, Dana and Eleanor Haskin, who owned and operated Waitsfield Telecom since 1904.

The Independent Telephone Company industry was booming throughout much of the 1900’s and it was during that time that the Telephone Association of New England was established. Many relationships were formed throughout New England and it is was through this connection that the Haskin family became friends with NHTM’s founder, Alderic O. “Dick” Violette, who worked for Merrimack County Telephone Company, the Independent that served Contoocook NH and surrounding towns for over 100 years.

Both Dana and Eleanor Haskin have passed away and although the company still thrives under the leadership of the brothers, on the personal side the Haskins had collected lots of antique telephones and related artifacts that have now become the responsibility of their children. The brothers both felt – and knew their parents would agree – that the fully restored 1928 Model A Ford Bell System Telephone Truck should be on display at NHTM.

“We’ve often talked about how an old telephone truck would really round out our collection nicely,” says NHTM Executive Director, Laura French, “but they are not easy to come by these days, so when Gregg and Eric reached out to us we were thrilled!”

The truck will make its official debut in the Warner Fall Foliage Festival parade on Sunday, October 8, 2017. After that it will be displayed in the Warner Firefighters Museum’s portion of the Telephone Museum building until a better display can be created.

The New Hampshire Telephone Museum is a non-profit 501(c)3 Corporation whose mission is to inspire curiosity by engaging a broad public audience in exhibitions and programs based on its remarkable and expanding collection. The Museum preserves the past and tells the stories of the telecommunications industry.   The museum, which opened to the public in 2005 under the direction of Alderic O. “Dick” Violette, a 50-year veteran of the telephone industry, and his son, Paul Violette, a 40-year telephone industry veteran. It features the collection of four generations of one family who, collectively, have careers spanning nearly 100 years. Visit NHTelephoneMuseum.org for more information.

Posted at 02:23 AM in Community/Civic Involvement, History | Permalink