Home Archives Subscribe
Protect Our Care to Hit the Road for “Lower Costs, Better Care” Nationwide Bus Tour with 2 Stops in New Hampshire To Tell Americans That Help Is on the Way Thanks to the Inflation Reduction Act
Biden Administration Puts an End to the “Family Glitch,” Lowering Health Care Costs for Families Nationwide

Manchester, NH -- Gilles Bissonnette, ACLU-NH’s Legal Director, is this year's Nackey S. Loeb School of Communications' First Amendment Award honoree, and will be saluted by the School on Thursday, October 20, 2022. The annual event honors New Hampshire individuals or groups that have advanced or exercised their First Amendment rights in some special or extraordinary way. Bissonnette was nominated for his work with stakeholders to improve the public’s right of access to information so the public can hold the government accountable, including a successful legal effort to reverse a 27-year-old precedent from 1993 that shielded the personnel files of government employees, including law enforcement, from public view. 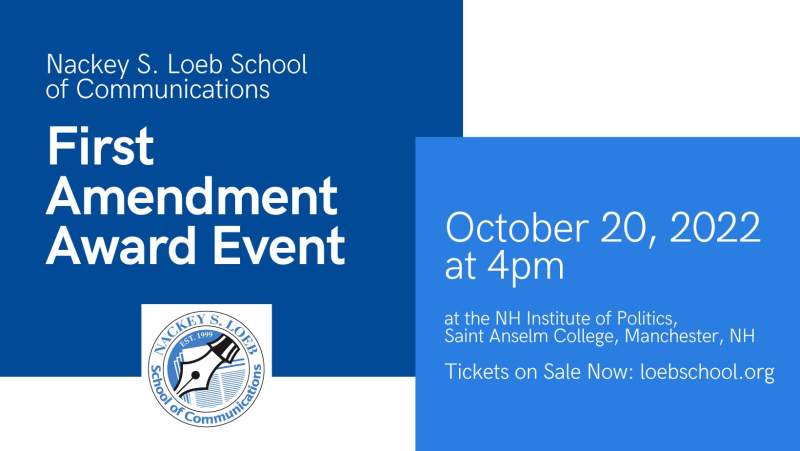 In addition to Bissonnette, New Hampshire Public Radio will be celebrated as recipient of The Nackey S. Loeb School’s Quill & Ink Award, not given annually, but reserved to honor significant contributions to the First Amendment.  NHPR is being honored for continuing to report the news, even as some of its staff were threatened with violence and had their homes vandalized.

The First Amendment Award Event on October 20 will be from 4pm-5:30pm and will feature guest speaker Jonathan Martin, a senior political correspondent for The New York Times, a political analyst for CNN, and the co-author of the recent New York Times best-seller “This Will Not Pass: Trump, Biden and the Battle for America’s Future.”

This event is open to the public, but space is limited, and tickets must be purchased in advance. Tickets are $100.00 each and will include admission to the event, and a copy of Martin’s book.

The non-profit, non-partisan Nackey S. Loeb School was founded in 1999 by Nackey Scripps Loeb, the late president and publisher of the New Hampshire Union Leader and Sunday News. Its mission is to promote understanding and appreciation of the First Amendment and to foster interest, integrity and excellence in journalism and communication. School classes, led by expert instructors attract students of all ages. New classes in community journalism, crisis communications, podcasting, open government, media literacy and misinformation have been added to core offerings in First Amendment law, digital marketing, public speaking, photography, public relations, writing and more.

For more information about the First Amendment Award Event and the Nackey S. Loeb School of Communications, or to purchase tickets, visit www.loebschool.org.