The anniversary comes as the state heads into a summer season that promises to see the return of many events and activities that were restricted due to the Covid-19 pandemic. 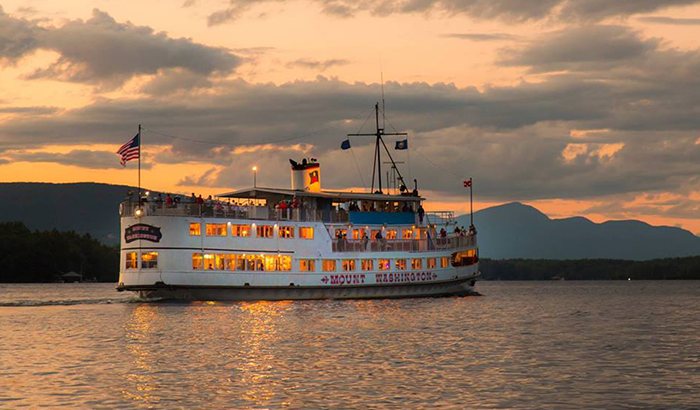 “The 150th anniversary not only marks a milestone for a historic ship, it’s also a chance to celebrate a return to the traditional Lake Winnipesaukee summer season,” said Capt. Jim Morash from Mount Washington Cruises. “The ship has endured for generations, in good times and bad, and we’re excited to see her again be a place where people come to gather, unwind and enjoy our beautiful lake.”

Mount Washington Cruises will celebrate the 150th anniversary of the M/S Mount Washington on Lake Winnipesaukee with the Anniversary Gala on August 12, 2022, hosted on the date the ship was launched. The special event will include multiple decks of entertainment, hors d'oeuvres, signature drinks, photo opportunities, and special limited-edition souvenirs.

Tickets to this signature event are available at cruisenh.com/products/150th-anniversary-gala.

A Season of Events

The 2022 Season will officially kickoff on May 8, with the Mother’s Day Brunch cruise, featuring a grand buffet, entertainment, and a flower for the moms. Other special events slated for the 150th Anniversary season include:

In addition to these special events, visitors can come aboard the M/S Mount Washington during a Narrated Cruise, running twice daily most days during the season, or the Sunset Dinner Cruise, offered on select evenings in spring and fall and on Monday, Wednesday, Friday, Saturday during the summer months. In addition, the M/S Mount Washington will offer a Sunday Brunch Cruise throughout the season.

A Tradition 150 Years in the Making

Since 1872, there has been a ship on the lake commissioned under the name Mount Washington. The first was the S.S Mount Washington, a 178-foot wooden side-wheeler built and launched in 1872 by the Boston & Maine Railroad company to take travelers and cargo from one side of the lake to the other.

There were many steamships operating on Lake Winnipesaukee in the late 1800s, but the SS Mount Washington gained notoriety as the fastest, and because of her connection to the railroad, quickly became the busiest lake transportation business, carrying more than 60,000 passengers a year by the end of the 19th century.

Captain Leander Lavallee, who was the owner of the destroyed Mount, soon announced plans to find a bigger, faster ship for the lake. In 1940, Lavallee purchased the 203-foot Chateaguay, berthed on Lake Champlain, Vermont. Moving the iron ship required cutting it into 20 sections and shipping it by flatbed railroad car. It was reassembled and outfitted with a new, powerful steam engine. Now 205 feet in length, the SS Mount Washington II launched on August 12, 1940, less than a year after the tragic fire.

The ship continued service through tough economic times and World War II, ushering in an era of transition. The Mount Washington’s steam engine was replaced by a diesel engine 1946, and she rechristened as the M/V Mount Washington. The ship underwent a complete overhaul in 1982, when the ship was cut down the middle and 25 feet was added to her length, reclassifying her as the M/S Mount Washington, the ship that is on Lake Winnipesaukee today.

The M/S Mount Washington draws thousands of visitors each year who enjoy the daily cruises.

In addition to the M/S Mount Washington, the Mount Washington Cruises fleet has grown to include the M/V Sophie C, the mail ship for the lake’s islands and the oldest floating post office in the nation; the Winnipesaukee Spirit, equipped for private events; and the M/V Doris E., which provides short cruises and shuttle service to Meredith.