Concord, NH –On Friday night, April 15 at p.m., the McAuliffe-Shepard Discovery Center and the Cowasuck Band of the Penacook Abenaki People present An Evening of Indigenous Stories of the Night Sky. In this free virtual program made possible by a grant from New Hampshire Humanities, emcees Chief Paul and Denise Pouliot, head speakers of the Cowasuck Band, welcome four noted indigenous storytellers to share tales of the stars, the Northern Lights, constellations important to Northeast Native America, and the Earth: HearsCrow, Anne Jennison, Louise Profeit-LeBlanc and Claudia Spears Moorehead. This Zoom program is free and open to the public, but registration is required; registration is via the Discovery Center’s website, www.starhop.com. 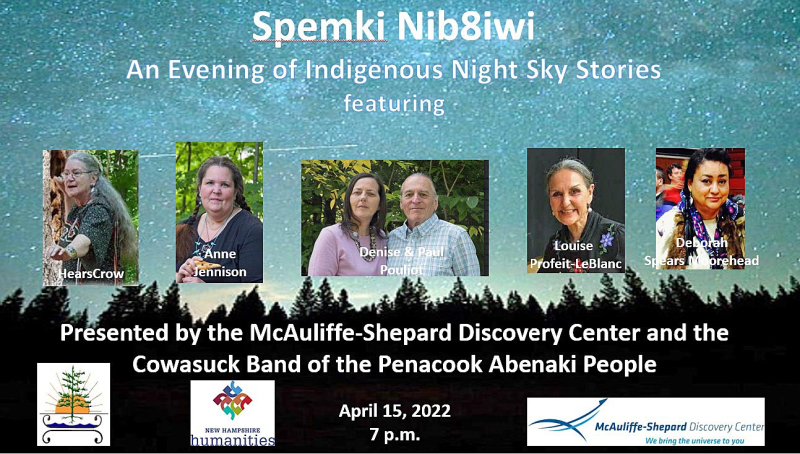 Chair of the NH Commission on Native American Affairs, Anne Jennison is a traditional Native American storyteller and historian with a master’s degree in storytelling and history and more than 30 years of experience sharing Indigenous lesson stories with audiences of all kinds. Deborah Spears Moorehead (aka Talking Water – “KutooSeepoo”) is an internationally known Wampanoag Storyteller, Visual, and Performing Artist, Author, Culture Bearer, Educational Consultant, and Song Writer. Louise Profeit-LeBlanc (Tse Duna - “The Beaver Woman”) is a traditional storyteller from the Na-Cho Nyak Dun First Nation of the Yukon Territory in Northwestern Canada, who now makes her home in Quebec. Hears Crow (Nootauau Kaukôntuah - “She Hears it from him, the Crow“) is a woman of the Eastern Woodlands who lives her life in the tradition of the Nanhigganêuck, the people known today as the Narragansett. She is a Storyteller of Longhouse Tales, told in many different ways, including Native Sign Language, call and response, and other traditional styles.