CONCORD, NH – The three organizations that have partnered to save the Concord Gasholder came together to celebrate the beginning of emergency stabilization work on this National Register-listed landmark. The New Hampshire Preservation Alliance, property owner Liberty Utilities, and the City of Concord have worked together over the past 18 months to develop a plan leading to the building’s protection and future use. 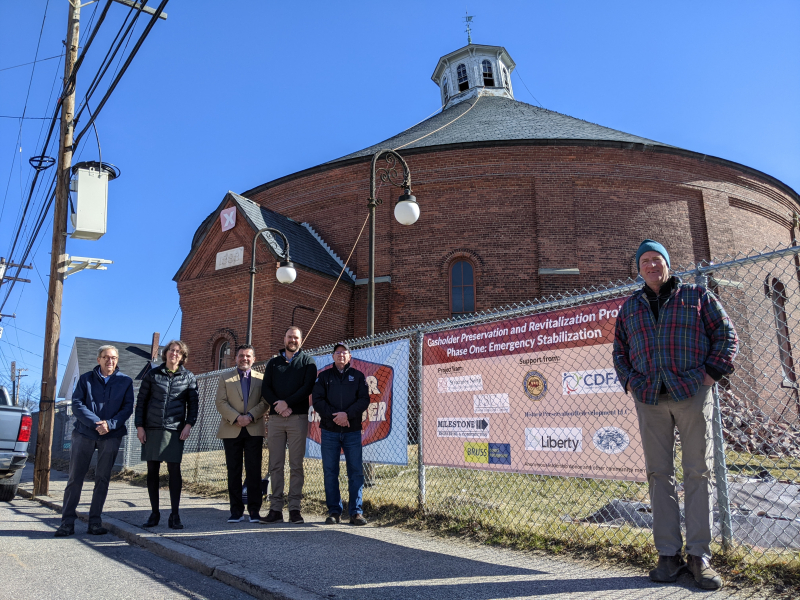 The New Hampshire Preservation Alliance is underwriting half the cost of Phase 1 stabilization with support from a generous anonymous donor. The statewide nonprofit organization listed the Gasholder on its Seven to Save list in 2020 because of its national significance and redevelopment potential after Liberty announced plans to seek a demolition permit due to the imminent risk of collapse. The Preservation Alliance has also hosted public forums, helped support redevelopment analysis and nominated the building for historic preservation grants.

“Liberty is proud to play a part in this community-led effort to save the Gasholder,” said Liberty-NH President Neil Proudman prior to the ceremony. “After spending more than a year listening to the community and working with stakeholders, we believe this mutually developed plan is the best option for Liberty’s customers and for the community of Concord. This plan is a win-win – it puts the Gasholder on a pathway for preservation, protects the environment and public health and safety, and will save money for Liberty’s customers compared to any available alternatives.”

The Gasholder, listed on the National Register of Historic Places, is considered the last of its kind in the country. Neighbors, civic and business leaders, and preservationists from across the nation have emphasized not only the importance of its preservation, but also its potential to serve as a catalyst for community development in Concord’s southern corridor.