Protect Our Care recently launched new digital ads thanking U.S. Senator Maggie Hassan (D-NH) and other Democrats for voting “yes” on the groundbreaking budget resolution that is being hailed as the “most significant expansion of the nation’s social safety net since Medicare and the Great Society.” Along with their Democratic colleagues in Congress and President Biden, Senator Maggie Hassan and Senate Democrats are delivering on their promises by seeking to expand Medicare to include dental, vision, and hearing, lowering premiums for those purchasing their health coverage through the ACA, closing the Medicaid coverage gap, and lowering prescription drug prices. The pandemic has laid bare the high costs and alarming inequities in our health care system, and this vote is a critical step forward to ensure that health care is a right, not a privilege.

“Senator Maggie Hassan and Senate Democrats have responded with bold action necessary to meet this moment,” said Protect Our Care New Hampshire State Director Jayme Simoes. “Americans have repeatedly demonstrated the importance of lowering health costs and expanding coverage both at the ballot box and in polling, ranking the issue as their top priority year after year. By holding Big Pharma accountable and allowing Medicare to negotiate drug prices on behalf of all Americans, we will lower drug costs for millions, expand hearing, dental, and vision coverage to seniors, reduce health care premiums for millions of people, and cover more Americans who are currently left behind. Senate Democrats are fighting in Washington on behalf of all Americans and won’t stop until the job is done.” 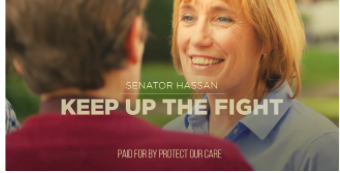 …and expanding coverage for millions more who can’t afford it.

Senator Hassan, keep up the fight and get it done.