Weirs Beach, NH --The M/S Mount Washington is one of the five properties that the State Historical Resources Council has added to the New Hampshire State Register of Historic Places. The current Mount has served New Hampshire on Lake Winnipesaukee since 1940. In addition to its history within the tourism industry, it continues to be integral to the tradition of determining "ice out" on the lake, which is officially determined when the ship can travel to all five of its ports of call.  Today’s Mount is last in a line of vessels that provided water transportation between the major communities surrounding Lake Winnipesaukee.
“Our primary goal is to preserve the M/S Mount Washington so that she that she will continue to be available for future generations,” said  Captain Jim Morash. “It’s quite an honor to be included in the State Registry of Historic Places, and it validates decades of work by hundreds of crew to keep her tradition going season after season.” 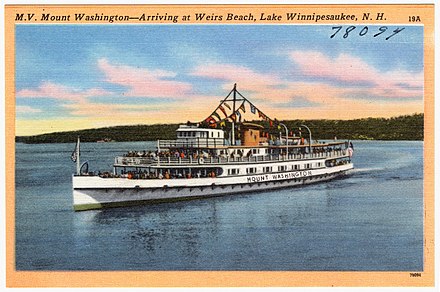 The Mount joins four other special places including:
Built in 1903-05 as a small chapel with the primary intent of educating children on Sundays, the one-story Cheever Union Sunday School in Dorchester has several distinctive architectural features, including a canted bell tower with an open belfry and an off-center large stained glass window on the front. Largely unchanged for more than 100 years, its interior is still finished in dark-stained beadboard and has all of its original hardware.
The John Howland Homestead includes a circa 1830 Greek Revival-style house and a timber-framed barn on 160 acres. It was one of the longest-running farmsteads in Easton and has significance as a rural agricultural landscape, specifically as a relatively intact example of an early nineteenth-century farm that was part of a larger agricultural community. A large percentage of its land is protected by a conservation easement.
Built in 1891 when Sunapee Harbor was Sunapee's tourism center, the post-and-beam Flanders-Osborne Stable had 18 horse stalls and room for carriages; visitors could rent single and double teams. As modes of transportation changed, it later provided service and seasonal storage for boats and automobiles. The building was owned by generations of the same family until 1980 when it was donated to the Sunapee Historical Society, which maintains it as a museum.
Located near the town common in Warren, the eight-ton, 73-foot tall Redstone Missile was built circa 1950 and is reportedly the only authentic Redstone rocket available for tourist viewing in the United States. Henry "Ted" Asselin, who was stationed at the Redstone Arsenal in Alabama, was able to bring the decommissioned missile back to his hometown in 1971 to commemorate Alan B. Shepard, Jr., another New Hampshire native and the first American in space.
Anyone wishing to nominate a property to the New Hampshire State Register of Historic Places must research the history of the nominated property and document it on an individual inventory form from the New Hampshire Division of Historical Resources. Having a property listed in the Register does not impose restrictions on property owners. For more information, visit nh.gov/nhdhr.
The M/S Mount Washington has be a New Hampshire icon since 1872. Departure times and options vary through the season.To learn more about the Mount Washington and to view a complete schedule with times and ticket prices, visit www.cruisenh.com or call 603-366-5531 to request a brochure to be mailed.###