Bretton Woods, NH — The Appalachian Mountain Club (AMC) has created the new Lynda Cohen Performing Arts Series, which will offer two free concerts this summer. Presenting the musical acts Beg, Steal or Borrow and Low Lily, both concerts will be hosted at the AMC Highland Center, located in the White Mountain National Forest in New Hampshire. Concerts are open to the public and preregistration for attendees is encouraged. Originating from her love of music and the mountains, AMC member and long-time supporter Lynda Cohen imagined a concert series where people from far and wide could come together, nestled among the peaks of Crawford Notch, to experience one of her lifelong passions, music. As a musician herself, Cohen understands how the arts can help create connections to the natural world. Thanks to her vision and generosity, the AMC is excited to offer musical performances for forest visitors and the surrounding community to enjoy. 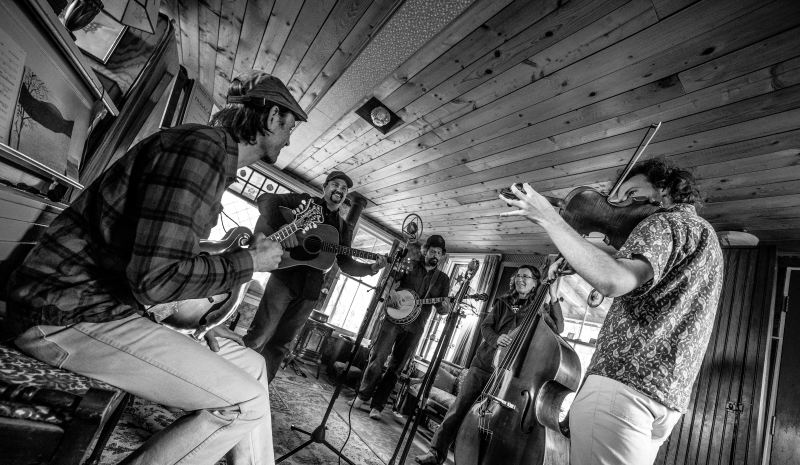 The series will launch this year with two free outdoor concerts. “For many years I have dreamed of a music program in Bretton Woods, accessible to everyone,” said Cohen. “I felt it would be important to bring in musicians with strong performance backgrounds and wide appeal across varied musical styles. The Appalachian Mountain Club was very receptive to the idea of initiating such a program at their Highland Center in Crawford Notch. The Lynda Cohen Performing Arts Series will enhance the experience of both residents and visitors to the Mount Washington Valley with the integration of music and the natural beauty of our surrounding Presidential Mountains.” Beg, Steal or Borrow will perform on August 28, 2021, from 7:00pm to 9:00pm with the opening act, Goodhues Band, performing at 4:00pm. Formed in 2013, Beg, Steal or Borrow received substantial acclaim well before the release of their debut album, Old Mountain Time.

Taking home honors from regional bluegrass competitions held in New York, Maine, and Connecticut, their initial inspiration was drawn from Old and in the Way, the acoustic bluegrass outfit helmed by Jerry Garcia and David Grisman. Their repertoire of original songs boasts both a contemporary and archival appeal. Low Lily will perform on September 18, 2021, from 7:00pm to 9:00pm. With a vocal blend that has been dubbed “outstanding” and “meticulous,” Low Lily’s cohesive sound comes naturally for musicians whose lives have been entwined on the road and onstage for almost two decades.

Setting down roots in Brattleboro, Vermont, the band has crafted a signature sound which they have shared with enthusiastic audiences throughout North America and the UK, garnering two #1 songs on international folk radio and two Independent Music Award win. Beer, alcohol, and snacks will be available for purchase on site; guests are allowed to bring their own food, but BYOB is not permissible due to state liquor laws. There will be limited parking available at the AMC Highland Center for concert goers, but overflow parking options will be nearby.

Both musical events will be held rain or shine. To learn more about and register for the concert series, visit its Eventbrite listing at amcmusic.eventbrite.com <https://www.eventbrite.com/e/lynda-cohen-performing-arts-series-at-crawford-notch-tickets-146663050131>. Founded in 1876, the Appalachian Mountain Club <https://www.outdoors.org/> (AMC) promotes the protection, enjoyment, and understanding of the outdoors. AMC helps people of all ages and abilities to explore and develop a deep appreciation of the natural world. With chapters from Maine to Washington, DC, guidebooks and maps, and unique lodges and huts, AMC helps people get outdoors on their own, with family and friends, and through activities close to home and beyond. AMC invites the public to support its conservation advocacy and research, youth programming, and care of 2,000 miles of trails.