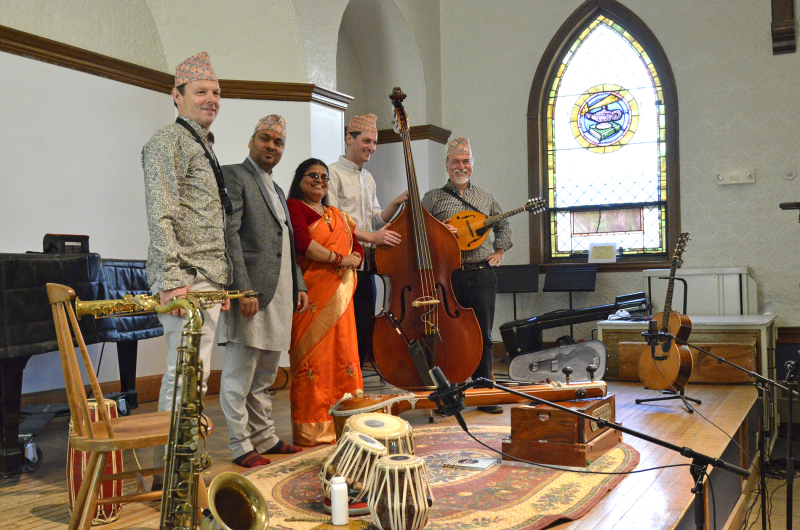 The Bach's Lunch concert, recorded in May 2019, features Harimaya Adhikari, vocals & harmonium; Prem Sagar Khatiwada, tabla; Scott Kiefner, bass; Matt Langley, saxophone; and David Surette, guitar & mandolin. Enjoy a Herbie Hancock jazz tune with Hari scat-singing a solo; an Irish jig with Prem on tabla; and an Indian raga with Scott, Matt, and David improvising in that style. In this 2021 version, the performers will also speak briefly about what they learned in this collaboration of improvising within each other's musical traditions.

A true picture of the Music School’s tagline, “a home for musical friendships,” longtime CCMS folk music coordinator David Surette became intrigued with the idea of a musical partnership between folk, jazz, and Nepali faculty members. He began improvising with Hari and Prem at their home in 2018, a tradition that included delicious Asian dinners. The Bach’s Lunch concert on which this virtual presentation is based was an outgrowth of that musical bond.

To access the concert, sign up for the Walker Lecture Series e-mail list. You will receive a Zoom link to the concert when it is released on April 21, and to the other presentations in the spring series. Thanks to The Timothy and Abigail B. Walker Lecture Fund for their sponsorship.

Harimaya Adhikari, originally from Nepal, holds a Master’s in Music from the Banaras Hindu University in Varanasi, India, and taught music at a university in Nepal. She sings and plays the harmonium, a hand-pumped reed organ. Ms. Adhikari performs for Indian, Bhutanese, and Nepali communities in New Hampshire and throughout the Northeast, especially for religious events and important traditional celebrations. She plays classical Indian music as well as sacred and popular tunes, and composes some of her own music in the South Asian traditions.

Sagar Khatiwada holds a Master’s degree in music from the Banaras Hindu University in Varanasi, India. He was born in Nepal and comes from a very musical family; his brothers play the bamboo flute and sing. He plays the tabla (a double drum with resonating surfaces on the top side) and the madal (a single drum with resonating surfaces on either end). After graduate work, he was on the music faculty of a university in Nepal. In addition to his musical expertise, Mr. Khatiwada studied Sanskrit and is a Hindu priest.

Scott Kiefner is a Concord Community Music School alumnus who graduated from McGill University's Schulich School of Music in Montreal, QC, where he studied with Fraser Hollins and Chris McCann. After college, he was selected for additional studies at the School for Improvisational Music Intensive workshop in New York City. Mr. Kiefner has since returned to New England, where he performs as an in-demand bass player with Jonathan Lorentz, Jim Dozet, Chris Klaxton, and many others throughout New England.

David Surette holds a B.A. from the University of New Hampshire. As part of a duo with his wife, singer Susie Burke, they have performed and recorded several albums, building a reputation as one of New England’s top folk duos. David was a founding member of the Airdance band with fiddler Rodney Miller, with whom he recorded four albums and toured nationally. He has also released five critically-acclaimed solo CDs. His recent solo release, Sun Dog, is a collection of original guitar solos; his forthcoming release will feature the Burke Surette Family Band with their two daughters.