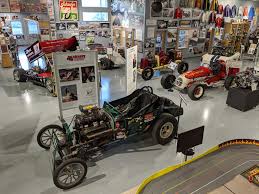 The North East Motor Sports Museum in Loudon, NH, is open every Saturday during the winter from 10am to 4pm. Their midget car featured exhibit is active and will be extended throughout 2021. The museum is 10,000 square feet with race cars and motorcycles from all disciplines, all with a New England background, on display. This museum is all about New England motorsports. Race win, championship trophies and driver helmets are on display. When you visit the museum, you’ll see stunning photography and unique New England racing artifacts. There’s even a wonderful Soap Box Derby display, slot car track and iRacing Simulator.

The following is a short recap of some of the major activity of 2020.

* The museum hosted two car shows. Hot Rods, Muscle and More with NH Muscle Cars and Pontiac Day at the Museum with the Nor’eastern Pontiac Club.

* The 1965 Race of Champions trophy from Langhorne Speedway won by Bill Slater has been refurbished and is on display. Pete Hamilton’s helmet and fire suit from his last race are also now displayed.

* In February, families and volunteers gathered for a day of fun with slot car racing and food at the annual Daytona Party.

* Two new murals were installed which feature midget racing at Westboro Speedway which was located in Massachusetts and the relatively unknown Springfield, MA motorcycle board track.

* In addition, hundreds of photos have been added to our collection along with new books, programs, posters and more has arrived for the pubic to view.

The North East Motor Sports Museum is the result of the collective effort of the entire regional motorsports community. https://www.nemsmuseum.com