The McAuliffe-Shepard Discovery Center invites the public to celebrate the 30thanniversary of the Hubble Space Telescope in a Facebook Live event on April 24 at 2 PM. During the Discovery Center’s first ever Facebook Live event, Education Director Mirka Zapletal, Education Coordinator Faithe Miller and Director of Visitor Services Sarah Nappo will unveil a an image captured by the Hubble that has never been publicly released, discuss30 years of scientific discovery enabled by this “eye to the universe”, and answer any questions event attendees may have. 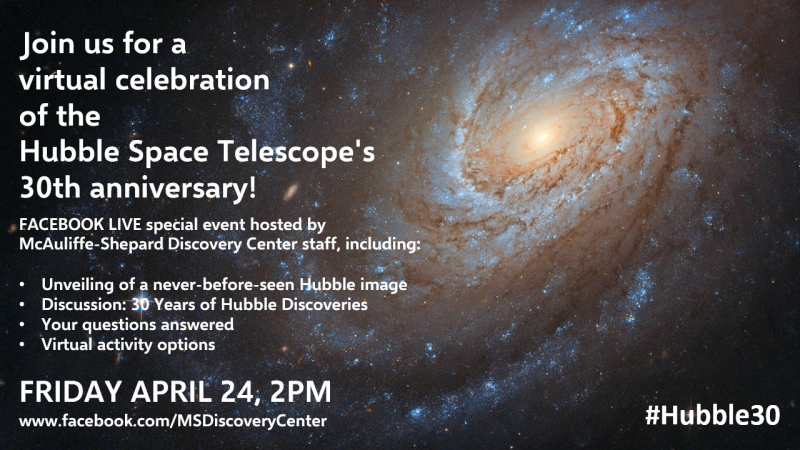 Directions to join the April 24 Facebook Live event: Follow the Discovery Center’s Facebook page, www.facebook.com/MSDiscoveryCenter/ and click on “Our Story”  on your home screen. The Hubble image will be on display at the Discovery Center for visitors to enjoy when the Center reopens. More information on the international celebration can be found via #Hubble30.

The McAuliffe-Shepard Discovery Center encourages those who wish to support the Discovery Center in its efforts to serve the community with online learning activities, to go to its website, www.starhop.comto donate, purchase a gift certificate or become a member. New members will still enjoy an entire year of fun, as all memberships purchased during this time will not expire until one year from the date the Discovery Center officially reopens to the public.