CONCORD, NH—The 18th Annual March Mandolin Festival Concerts will be held March 6 and 7 at two great venues for live acoustic music. Friday, March 6, the festival opens with a 7:00pm show at The Dance Hall in Kittery, Maine. Saturday’s concert will be held at 7:30pm at the Concord Community Music School in Concord, New Hampshire, the host venue for the entire festival, which runs Saturday and Sunday, March 7 & 8. 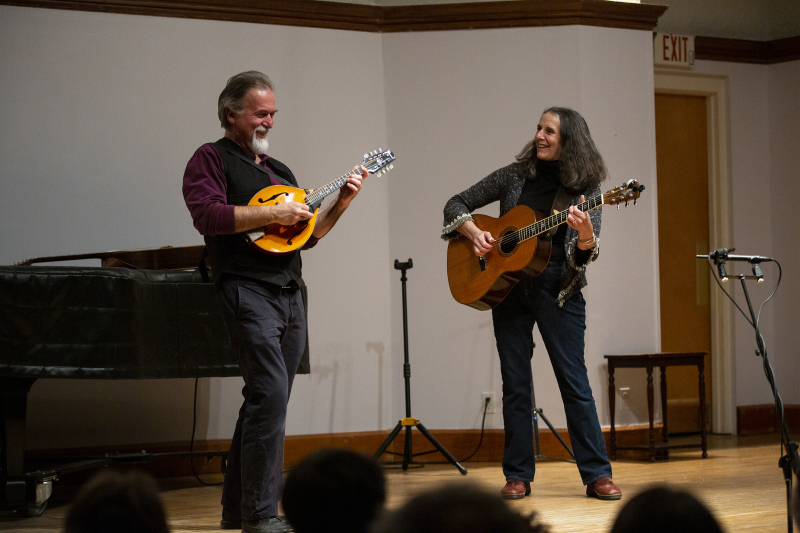 The March Mandolin Festival has been bringing the cream of the crop of the mandolin world to New England for years now; the 2020 festival features Radim Zenkl, Maddie Witler, Steve Roy, and David Surette, with special guest vocalist Susie Burke.

Radim Zenkl is known worldwide as a mandolin innovator and virtuoso player, both as a soloist and with groups such as the Modern Mandolin Quartet and the Ger Mandolin Orchestra. Maddie Witler is part of the cream of the crop of a younger generation of great bluegrass pickers, and has toured internationally since 2012 as a founding member of the Lonely Heartstring Band. The seacoast’s thriving local music scene will also be well-represented with Steve Roy, one of New England’s best and most in-demand players and band members, and festival organizer David Surette and his wife and duo partner Susie Burke. Together this stellar group will present a rich and varied evening spotlighting the range, beauty, and excitement of the mandolin. Bluegrass and old-time, folk and blues, Celtic and other European traditions, and contemporary compositions will make for a spectacular listening experience, including plenty of collaborations. Expect the unexpected!

As of February 12, there are 9 seats remaining for the March Mandolin Festival Workshops on March 7 & 8 at Concord Community Music School; interested mandolin players should visit www.ccmusicschool.org or call 603-228-1196 to register. More than 50 participants are expected from across New England and as far as Quebec.

(This is a separate ticket from Saturday and Sunday events at the Concord Community Music School.)

David Surette is highly regarded throughout New England and beyond for his work on the mandolin, guitar (both flatpick and fingerstyle), and bouzouki; Sing Out Magazine wrote that "Surette's playing is always inventive, and sets a new standard for traditional instrumentalists." As part of a duo with his wife, singer Susie Burke, they have performed regularly together for many years (30 years in 2018!), recording several albums and building a reputation as one of New England’s top folk duos. Surette was a founding member of the Airdance band with fiddler Rodney Miller, with whom he recorded four albums and toured nationally. He has also released five critically-acclaimed solo CDs; his most recent release, Waiting For The Sun, is a duo recording with Susie. He is also an experienced teacher, and coordinates folk music programming and teaches regularly at the Concord Community Music School, as well as at numerous summer music camps and festivals. www.BurkeSurette.com

Maddie Witler is mandolin player and vocalist in the Boston-based Lonely Heartstring Band, which just released its third album, Smoke & Ashes. Maddie hails originally from La Crescenta, California. She picked up the mandolin when she was 14 and fell in love with the instrument, and bluegrass music. She’s studied with mandolinist Evan Marshall, with whom she worked her way through a lot of Bach, jazz, bluegrass, and other styles. Maddie attended the Berklee College of Music from 2010–2014, studying with musical heroes like John McGann, Joe Walsh, Julian Lage, Mike Compton, and Andy Statman. Maddie met her bandmates from the Lonely Heartstring Band while at Berklee, and has been a member since it began in 2012.

Radim Zenkl grew up in Ostrava, Czechoslovakia where he studied classical guitar, mandolin and composing. Between 1984 and 1989, he performed as a guest soloist with the Janacek Philharmonic Symphony and the State Opera Orchestra of Ostrava. Zenkl moved to the USA in 1989 and won the Winfield Mandolin Championship in 1992. He has invented a masterful technique, the ‘Zenkl style,’ in which a single mandolin sounds like two. Besides collaborating with the top musicians of the acoustic music scene, Zenkl has created an extensive repertoire for solo mandolin and mandola. He has recorded several solo CDs (Acoustic Disc, Shanachie and Ventana) and has appeared on more than sixty other recordings. Zenkl’s worldwide performing and teaching credentials include guest appearances at prestigious music institutions such as the Berklee College of Music in Boston and the Sibelius Academy in Helsinki, Finland. He is also a member of the Modern Mandolin Quartet and the Ger Mandolin Orchestra, led by Mike Marshall. www.zenkl.com

Steve Roy is a multi-instrumentalist from Eliot, Maine, who plays and teaches mandolin, as well as upright bass, fiddle, guitar, and ukulele. He is fluent in a vast array of musical styles, including bluegrass, jazz, folk, rock, jam, country, old time, heavy metal, etc. As a sideman, he has toured nationally and internationally with acts such as Laurie Lewis and Tom Rozum, John Reischman and the Taterbugs, Molly Tuttle, Joe K. Walsh, Frank Solivan and Dirty Kitchen, Joy Kills Sorrow, Hit and Run Bluegrass, and many others. Locally, he is well known for his work with groups such as Old Hat Stringband, Jazzputin and the Jug Skunks, Steve and Dave Play Dead, Erica Brown and the Bluegrass Connection, The Stowaways, High Range, The Mill City Ramblers, Spinal Tarp, and countless others. He is currently a faculty member at 317 Main, PMAC in Portsmouth NH, and at music camps around the country. Steve is also an archaeologist with field experience in Central America and New England.  www.oldhatstringband.com

About the Concord Community Music School

Concord Community Music School is a member of the National Guild for Community Arts Education and is recognized nationally for program innovation and management excellence. Welcoming adults, teens, and children of all musical abilities, 50 teaching artists reach more than 33,000 people in four states with educational programs, concerts, workshops, and community partnerships. CCMS has received major funding from the National Endowment for the Arts, the Hearst Foundation, New Hampshire State Council on the Arts, Jane’s Trust, and the New Hampshire Charitable Foundation. The Music School has earned honors including the Governor’s Arts Award for Cultural Access Leadership; Riverbend’s Champion for Mental Health; Greater Concord’s Favorite Musical Instruction from Parenting New Hampshire Magazine; and New Hampshire Magazine’s Best Music School for Everyone.