Canterbury Shaker Village is building a reputation as a great venue for music, and their second annual Harvest Music Festival promises to be bigger and better than last year.  It takes place on Saturday, October 26 from 3 – 8 pm, and includes beverages from Canterbury Aleworks and food from the Creamery Café--soups, sandwiches and baked goods—in a historic building in the heart of Shaker Village.

Six groups of talented traditional musicians will perform on two different stages at staggered times. If you like bluegrass, Celtic, folk and lively traditional fiddle playing, this is an event you won’t want to miss.  The music and setting combine to create a memorable experience.  Canterbury Shaker Village’s 25 historic buildings, fields and gardens make it one of the most picturesque and extensive historic sites in the state.  Support for the festival has been provided by the NH State Council on the Arts. 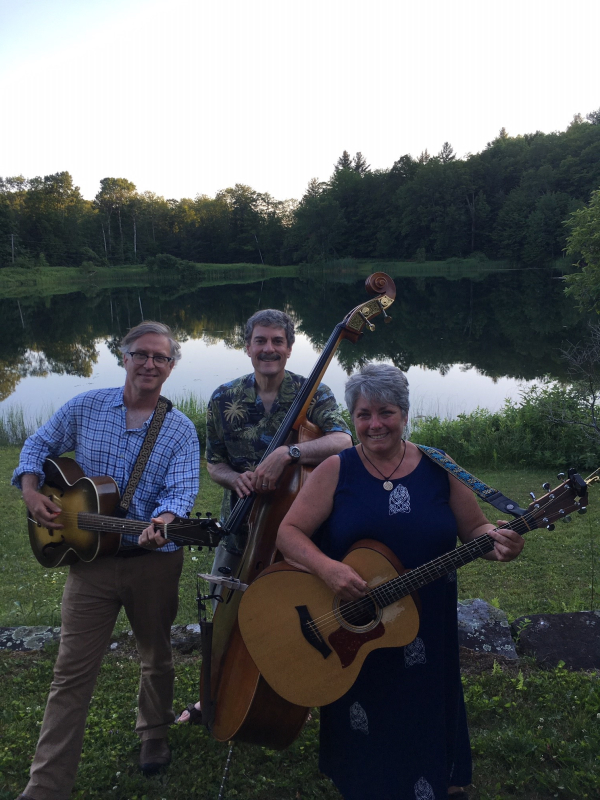 High Range Band is an energetic roots/folk/bluegrass group with a long list of rave reviews by critics from Portland to Nashville.  They have performed together for 20 years, playing original music along with a mix of cover songs.  “The vocals are tight and true; the instrumental work impressive, the songs a pleasure to hear repeatedly,” raves reviewer Dave McCarty. “High Range has forged a tight, compelling ensemble sound that is highly musical and thoroughly entertaining.”

Rose Hip Jam is based in the Upper Valley of New Hampshire and Vermont where they’ve developed a strong fan base at restaurants, festivals, country fairs and special events. Their repertoire is mostly covers in eclectic styles – folk rock, country, Delta blues and Americana from several decades. Kerry Rosenthal, formerly of Concord, NH, is on vocals and guitar.  Guitarist and vocalist Steve Glazer complements Eric Bronstein who is a sought-after bassist in both jazz and folk rock ensembles.

The Wholly Rollers, a Concord-based group of singers and instrumentalists, have been playing for audiences in New Hampshire and Massachusetts since 2016. They began as an Old Time Bluegrass Gospel group and now have five members: Brian Roff on vocals & guitar, Jeff Fetter on vocals, fiddle & mandolin;  Gary Schroeder on vocals & bait bucket bass; Craig Whitson on vocals & guitar; and Dick Bennett on vocals and any instrument left unprotected.

After thirty years working in the recording studios and orchestra pits of Nashville, guitarist Jim Prendergast now lives in NH where he is a prime mover behind New England’s thriving Celtic/folk music scene.  Bandleader for seven years at Findley’s Irish Pub in the Gaylord Opryland Hotel, and producer of CMH Record’s Celtic Tribute Series, Jim now specializes in producing traditional music at his Mill Pond Studio in Portsmouth.

Considered one of the most talented Irish musicians in America today, Hanz Araki is a flautist, whistle player, singer, and Juno Award-winner who is beloved by critics and audiences alike.  Three decades of musical exploration into Irish, Scottish, Japanese, and American traditions forged his distinct style which the Boston Irish Reporter described as, “sweet-toned, sensitive yet deceptively powerful.”

Liz Faiella's singing and fiddle playing, steeped in Scottish and Irish tradition, draws energy and spirit from the convivial grange hall contra dances of her youth in rural New Hampshire. She has performed at folk venues throughout New England, including Club Passim, the Acadia Trad Festival, Maine Celtic Celebration, and the Boston Celtic Music Festival.  She and her brother Dan Faiella can both be heard on her album, At Long Last.  Liz teaches at the Concord Community Music School where she is chair of the Folk, Jazz, and Popular Music Department and directs their annual Fall Fiddle Festival.

Lindsay Straw, a guitarist, singer and Irish bouzouki player, has been inspired by traditional music since her childhood in Montana. She says she truly grew into her art when she became immersed in Boston's Irish and folk music scenes. With the help of a Club Passim Iguana Grant, she has released two albums of traditional Celtic ballads. Lindsay also plays with her Irish band The Ivy Leaf and in an Americana/roots duo with her partner Jordan Santiago.

The Jordan Tirrell-Wysocki Trio puts a fresh spin on traditional Celtic music, delivering a dynamic show full of lively fiddle tunes and classic Irish sing-alongs. Award-winning fiddler Jordan Tirrell-Wysocki is joined by Matt Jensen on guitar and Chris Noyes on upright bass. In a unique blend of Irish and Scottish music and their own original material, these three New Hampshire natives have a sound described as “larger-than-life” and “brisk, lean and exceedingly lovely.”  Jordan was awarded the title of “Master Artist” by the NH State Council on the Arts in 2013, and named “Best Fiddler 2016” by NH Magazine. He recently composed the new theme music for New Hampshire Chronicle, and the Trio formed the core band that recorded it.

Throughout the event, the musical traditions of the Canterbury Shakers will be presented in the Chapel of the Dwelling House, where the newly-restored 1887 Hook & Hastings pipe organ is installed.

Admission to the Music Festival is $12 for adults and $6 for children (6-17). Members of Canterbury Shaker Village pay half price. Under 5 free.  Book online at shakers.org until 48 hours before the event.  Tickets will also be sold over the phone (603-783-9511 x285), and at the door.  Library passes will not be honored for this event.

Enjoy the fall season and make some great memories with the festivities and friendship at Canterbury Shaker Village in October, a premier NH historic site.

Canterbury Shaker Village is open daily from 10 – 4 through October 27 (closed Monday, Oct. 21), then weekends in November.  Christmas events begin in early December.  Call the Village for group rates and to learn about year-round opportunities for private rentals and meetings.