The Mount Washington Cog Railway, the first mountain–climbing cog railway in the world, is celebrating 150 years of operation this year in 2019. The Cog, (as it is affectionately nicknamed) is located in the White Mountains of New Hampshire, 6 miles from the grand Mount Washington Hotel.

The Cog, once hailed as the “Second Greatest Show on Earth” by P. T. Barnum, has remained a key icon of New Hampshire’s heritage and has maintained its historic roots by allowing passengers to take the three-hour guided round-trip in a historically inspired coach powered by 1908 and 1875 vintage coal-fired steam locomotives or one of the modern biodiesel engines, all built on-site. 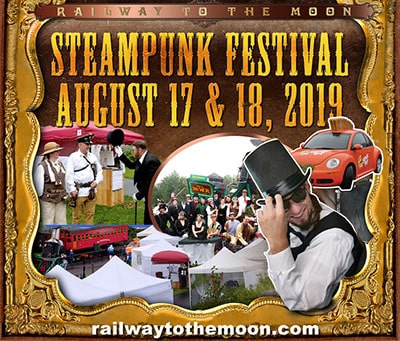 In its 4thyear, this exciting festival is a treat to the senses with steampunk fashion, live music by the King’s Busketeers, and Victorian lawn games hosted by Jewelry City Steampunk of Attleboro, MA.

Steampunk Guru, Bruce Rosenbaum, featured on Netflix’s “Amazing Interiors” for his gothic church restored in Steampunk style, will be presenting as well as artist Todd Cahill, with his inventive and lively steam machine art.

There will be kid-friendly activities such as Tinker-Bots, giant bubbles and magician shows happening throughout the day at the base, as well as the headliner, a steam train experience in which participants will enter a whimsical steampunk world on the train ride up to the summit. There are puzzles to solve and quirky characters to meet in this interactive adventure game. The magic begins on the grounds of the festival and takes players aboard a one-of-a-kind steam engine that carries guests up to the thrilling conclusion among the clouds.

Participants can cruise the festivals vendor tent where Steampunk baubles and gadgets, accessories and art will be offered for purchase, visit the Brewers’ Corner on the deck, where local breweries by such as Moat Mountain Smokehouse & Brewery, Vermont Cider Company and Sap House Meander can be sampled by the 21 + crowd. Food trucks Boogalows Island BBQ and the Purple Straw will be serving their scrumptious options.

As anadded bonus, Cog Railway lodging partner, Adventure Suites, will be hosting a Steampunk After Party in their newly built saloon at their 3440 White Mountain Highway, North Conway location. Party-goers can enjoy appetizers, mini -massages, outdoor firepit, music and cash bar. Attendees are encouraged to wear their Steampunk best, and prizes will be awarded. There is a $10 cover charge for attendees, hotel guests are complimentary.  Visit adventuresuites.com for more information or call 603.356.9744

The Mount Washington Cog Railway is located at 3168 Base Road, Mount Washington, NH just six miles from historic Bretton Woods and Rte. 302, and 3 hours north of Boston. Railway To The Moon Steampunk Festival is free to the public and will be held rain or shine at Marshfield Base Station, Mount Washington, NH. More information on this and other season events, schedule and rates can be found online at thecog.com or by calling 800-922-8825.