The Mount Washington Cog Railway, the first mountain–climbing cog railway in the world, is celebrating 150 years of operation this year in 2019. The Cog, (as it is affectionately nicknamed) is located in the White Mountains of New Hampshire, 6 miles from the grand Mount Washington Hotel.

The Cog, once hailed as the “Second Greatest Show on Earth” by P.T. Barnum, has remained a key icon of New Hampshire’s heritage and has maintained its historic roots by allowing passengers to take the three-hour guided round-trip in a historically inspired coach powered by 1908 and 1875 vintage coal-fired steam locomotives or one of the modern biodiesel engines, all built on-site.

Wayne Presby, owner of the railway with his wife, Susan, speaks of the momentous anniversary in these words, “We consider the time we have spent at the railway a great honor. We feel that we have a solemn duty to the state of New Hampshire, it’s residents and all who have worked to keep the Cog Railway a viable entity. As the current owners of the railway, we intend to do everything in our power to continue to preserve, promote and enhance the railway and to ensure that 150 years from now it will be celebrating its 300thanniversary!” 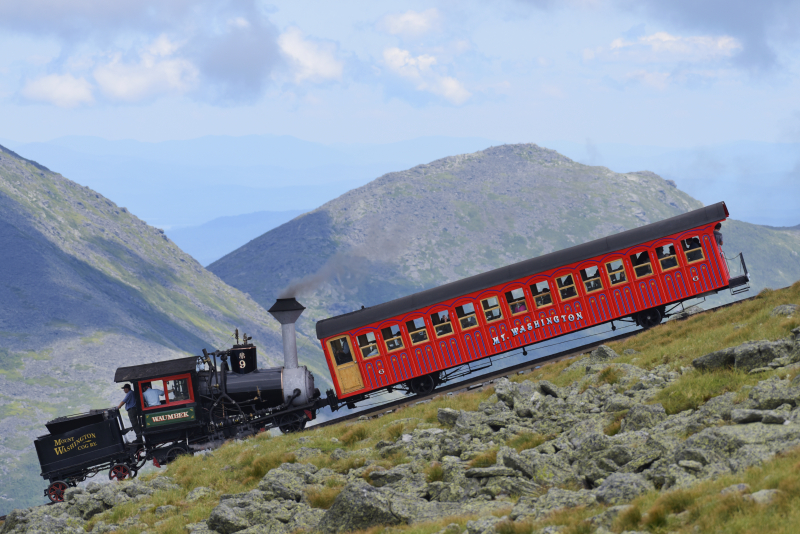 To kick off the anniversary season, each day, the 150thrider on the railway will receive their ticket at the price it was in the opening year of 1869, $3.00. There are also a series of events planned to celebrate the season, starting with a 150thanniversary Gala on June 22nd. This will be an event of epic proportions with refreshments, presentations, a limited-edition gift package, and optional train ride ending in a magnificent custom firework display on the mountain. Tickets and information can be found at thecog.com/150gala

There will be family activities throughout the day on July 3rd, in honor of the dateThe Cog officially opened for business.  On this day, there will be Victorian lawn games, barbeque, birthday cake, music and more.

On August 17th and 18th, The Cog will host its annual Railway to the Moon festival.

In its 4thyear, this exciting festival is a treat to the senses with costumes, live music by the King’s Busketeers, an interactive Steampunk train ride, presentations, tea dueling hosted by Jewelry City Steampunk, and more.

The Steampunk festival is a celebration of the inventiveness of Cog entrepreneur, Sylvester Marsh, and his undaunted will to build a “Railway to the Moon”. It is a combination of the wild west, meets Jules Verne meets the Victorian Era with a circus atmosphere. Visit railwaytothemoon.com for festival details.

The Cog Railway is located at 3168 Base Road, Mount Washington, NH just six miles from historic Bretton Woods and Rte. 302, 3 hours north of Boston and 6 hours north of NYC. More information on the season events, schedule and rates can be found online at thecog.com or by calling 800-922-8825.