The Mount Washington Cog Railway, the first mountain–climbing cog railway in the world, is celebrating 150 years of operation this year with a kick off road trip. The Cog, (as it is affectionately nicknamed) is located in the White Mountains of New Hampshire, 6 miles from the grand Mount Washington Hotel.

The Cog is kicking off its 150thseason with a tour of Peppersass, a special 153-year-old train. Peppersass is the train that built the railway tracks, starting in 1866 and finishing the job in 1869. It is the first and only engine of its kind. It consists of a vertical wood boiler that ran at 45 hp at 50lbs pressure, and small tender. (The total cost when built was $3k) The train weighs in at 4 tons, and has been completely restored, painted in the same bright colors as it was in the turn of the 20th century, having been retired in 1929.

Peppersass will be traveling first to Philadelphia, Pennsylvania, for the Travel and Adventure show, March 9 and 10 and then onto the Steamtown Museum in Scranton Pennsylvania, where it will be on display from March 11-13, before heading down to the Travel and Adventure show in Washington, D.C. Peppersass can be followed on the Instagram.com/cograilway and on Facebook/pepperass. If you see Peppersass in passing – share it on twitter at #isawpeppersass

Also, on deck, The Cog will be celebrating its 150thseason throughout with a daily ticket deal. Every 150thrider on the railway will be taking the trip at the same ticket rate as it was the year it opened in 1869, three dollars.

There will also be a series of events planned to celebrate the season, including a 150thanniversary Gala on June 22nd. This will be an event of epic proportions with refreshments, presentations ending in a magnificent custom firework display on the mountain.

There will be festivities throughout the day on July 3rd, the day the birthday of the Cog.

On this day, there will be Victorian lawn games, cake and ice cream, music and more. Fireworks will end the day.

On August 17th and 18th, The Cog will host its annual Railway to the Moon festival.

In its 4thyear, this exciting festival is a treat to the senses with costume, live music, live steam art and more. The Steampunk festival is a celebration of the inventiveness of Cog Entrepreneur, Sylvester Marsh, and his undaunted will to build a “Railway to the Mon”. It is a combination of the wild west, meets Jules Verne meets the Victorian Era with a circus atmosphere. Visit railwaytothemoon.com for festival details.

The Cog has remained a key icon of New Hampshire’s heritage and has maintained its historic roots by allowing passengers to take the three-hour round-trip riding in a historically inspired coach powered by 1908 and 1875 vintage coal-fired steam locomotives or one of the modern biodiesel engines, all built on-site.

The mountain train experience is a must-do New England adventure to many. As the Cog’s 150thseason gets underway, there will be a number of events and activities in celebration of this momentous anniversary, making this the perfect time to make the trip to New England’s most iconic historic attraction. 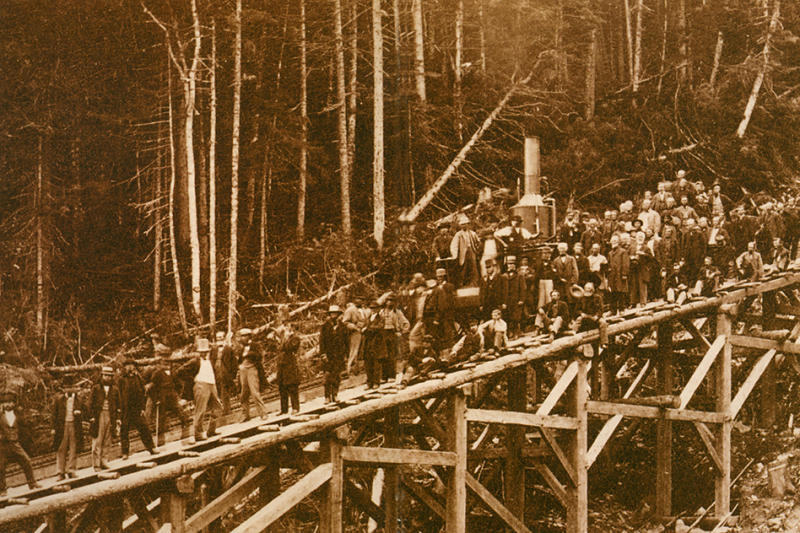 Passengers experience views reaching from the Atlantic Ocean into Canada as the train reaches the summit on their journey.  Once at the top, visitors will find Mount Washington State Park and the Sherman Adams Visitors Center. This hearty mountain-top facility houses a winter weather exhibit, cafeteria, gift shop and restrooms. There is an hour to visit the 1853 Tip Top House, (the original hiker’s hotel) enjoy a snack, explore the state park building and take in the magnificent view from the rocky summit.

Back at the mountain base, the new Cog Railway Museum, located in the upper level, tells visitors the fascinating story of how the historic railway came to be and offers media presentations and interactive exhibits. Visitors can also peruse the gift shop full of local and custom items to find that perfect Cog gift or souvenir.