Home Archives Subscribe
Fall Foliage Celebration at Waterville Valley
New ideas for a colorful fall: This autumn, experience the colors of New Hampshire by boat, train, on foot or even downtown!

Concord, NH—NASA Patch Artist, Tim Gagnon will give his talk “From Dreams to Orbit” at the McAuliffe-Shepard Discovery Center on Sunday, September 16 at 1 PM with a STEAM patch workshop afterwards.

Born and raised in East Hartford, CT, a fascination with space exploration and art came early for Gagnon. He combined these two passions, first as an artist commemorating different aspects of the space program, and then later designing NASA patches to actually contribute to the space program. Some of his most famous artworks include“On the Shoulders of Giants” a 4’ x 8’ acrylic on board of the 12 moonwalkers, “One Small Step… For a Woman” in honor of Eileen Collins becoming the first woman to command a spaceflight, and “Past is Prologue” a 48” x 24” piece celebrating 50 years of America in space. Beginning in 2004, Tim has designed patches for Expeditions 25, 26, 27, 29, 30, 34, One Year, 47 and 48 to the International Space Station and for the following crews STS-120, STS-126, STS-127, STS-129, STS-132, STS-133 and STS-135. He also designed a ten-part series of patches to “Celebrate 50 years of America in Space.” Gagnon has served as director of the Young Astronaut Program in Connecticut from 1986-1991 and in Merritt Island, FL from 1999-2005 to promote space science education for children. 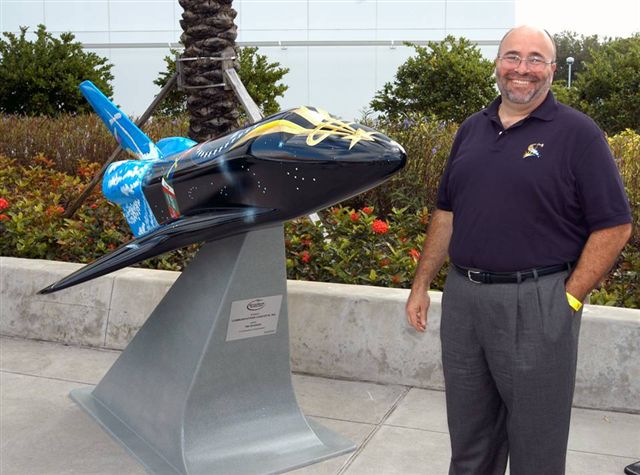 Gagnon’s talk, “From Dreams to Orbit” or How a Shy Nerdy Kid Became “The Patch Guy” will educate and (hopefully entertain) people about how mission patches are designed. After the talk, the Discovery Center will host an informal patch workshop where visitors can have the chance to design their own NASA patches. Gagnon will be briefly available to chat with people about their designs before selling his patches.

For more information on Tim Gagnon, visit his website www.kscartist.com.