Home Archives Subscribe
Waterville Valley Resort – Everything you want in Fall in one place!
New Hampshire’s Ski Resorts Celebrate Fall with a Variety of Activities

Concord, NH--- This weekend the New Hampshire State House will be open to visitors on a Saturday for the first time in generations. And while not everyone knows much about the capital of New Hampshire – there is some big news coming out of this city on the Merrimack of 40,000. It is morning in Concord…. 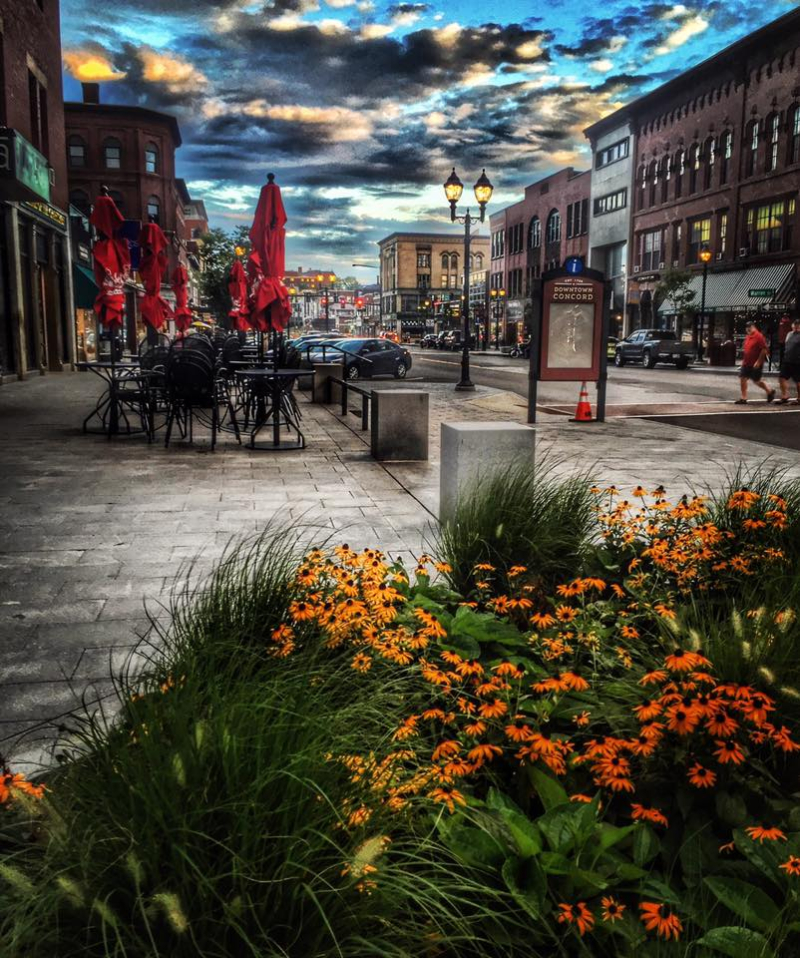 A 2-year, multi-million dollar project is wrapping up this fall to transform the city’s Main Street – New streetscapes have made the central shopping, dining and entertainment district more inviting and attractive. There are lots of new places to shop and eat mixed with great 19th century brick architecture. Nearly completed, the project has added a “wow factor,” with expanded sidewalks, directional signage, trees, better lighting, sitting areas, outdoor dining and more pedestrian access.

And, almost 100% of the stores and restaurants along Main Street are locally owned. They range from locally made fashion and jewelry, to antiques and juried artists, to a range of authentic cuisines including Greek, Asian, vegan and more. It is a small city with big city offerings, reminiscent of Boston’s Newbury Street, with a variety of art-inspired stores including the League of NH Craftsmen, Capital Craftsmen and Romance Jewelers, art galleries and shops with other rare finds.

But the catalyst to the city’s rebirth is that Concord packs the biggest cultural offering north of Boston. The Capital Center for the Arts has Broadway shows, international performing artists, ballet – you get the picture. And, just across Main Street, Red River Theatres shows hothouse independent films and offers events like costume parties and sing-alongs unavailable in big box theatres. Down the street, the City Auditorium has all kinds of concerts, shows and plays in a smaller setting, many of them free.

Up the road at the Steeplegate Mall, a former retail space is now the new Hatbox Theatre – 99-seat venue that features everything from: original plays, concerts, magic, stand-up and improv comedy, storytelling, readings, podcasts and even a production of full-blown Tony-award-winning musical. Back on Main Street, New England College has turned a storefront into an arts space, too – with concerts every weekend. Similar programs are offered outdoors in season by the True Brew Barista in Bicentennial Square. The city is suddenly full of music.

That is no surprise, as the Concord Community Music School has attracted top talents to teach and perform here for more than 30 years – their Mandolin and Fiddle festivals draw folks from miles away.

It is a good time to dine in Concord, too. Not only is the city’s revived Main Street drawing in big crowds, but also a variety of new restaurants have opened in the past months, shaking up the city’s dining scene. Across from the State House, the Little Creperie serves a variety of crepes and waffles with tasty toppings in the heart of the Main Street.

The Smokeshow Barbeque recently opened its doors on Ft. Eddy Road, minutes from downtown, offering a tasty array of ribs, brisket, and turkey with beans and other great sides. Affordably priced, authentic and tasty - this BBQ joint is drawing rave reviews.

Not far away, Go Food Basket on Washington Street is serving up Asian fare, including homemade kimchi and hand rolled sushi – they offer traditional Korean recipes, made with style.

Also, recently opened is Lithermans Limited Brewery – opened in April. They brew and serve more than a dozen beers at 126B Hall Street. The tasting room offers guests a chance to explore new beers, and buy their local brews to enjoy at home.

The city has a new breakfast and lunch place—Tucker’s at 80 South Street. They offer fresh takes on traditional dishes—and gluten free options.

Add to that the recently opened gourmet burger eatery on S. Main Street, Vibes, and the Clean Take, which will cook you a healthy full meal to go.

Concord is, as already noted, the state capital – with the 1819 NH State House right on Main Street – open five days week with 194 years of history to share. Starting this weekend this monument to politics will be open to visits one day each weekend, a first.

The city lives for politics, and this is the place to learn about the NH First in the Nation Primary at the State Library, Barley House Restaurant, and Statehouse. A new Concord Chamber walking tour helps guest to explore off the beaten path historic sites, such as the Eagle Hotel where Martin Van Buren became the new VP candidate, the street behind the State House where President Bill Clinton and Barack Obama drew tens of thousands, and Granite State Candy where both Clintons stopped for a scoop of homemade ice cream

So, to sum it up – Concord is a New England City with lots of art, culture, history and things to do. It is 1 hour from Boston, and 30 minutes from Manchester-Boston Regional Airport. It has the hotels, dining, and right feel to be a destination – and while it lacks the crowds of other places, it has all makings of a real destination.