Waterville Valley, NH —In celebration of the world’s most beloved monkey, who turns seventy five years old this year, filmmaker Ema Ryan Yamazaki announces the first ever mixed media documentary about Curious George. Monkey Business delves into the extraordinary lives of Hans and Margret Rey, the authors of the beloved Curious George children’s books. The Reys were of German/Jewish descent and narrowly escaped the Nazis on makeshift bicycles they rode across Europe, carrying the yet-to-be-published Curious George manuscript with them.

To tell this remarkable story, Yamazaki obtained exclusive rights from the Rey's estate, curated by longtime caretaker to Margret Rey, Ley Lee Ong, gaining access to the over 300 boxes of the Reys’ personal archives at the de Grummond Collection, housed at the University of Southern Mississippi. Through a unique and Reyinspired technique of animation, as well as archival photographs, the documentary tells the story of the couple's lives, the birth of George and how the well-loved children's book character almost didn't come to fruition. Houghton Mifflin Harcourt and Universal hold the publishing and merchandising rights to the literary and cultural icon, but it is Yamazaki who has been entrusted with documenting this inspiring story of perseverance, adventure, family and what it means to be a world citizen.

Monkey Business: The Curious Adventures of George’s Creators is Yamazaki’s directorial debut, after amassing an impressive editing credit list including collaborations with seasoned storyteller, Sam Pollard ( When The Levees Broke ). Marc Levin (Chicagoland) is onboard as Executive Producer. Yamazaki, who claims Japan, the UK and New York as three unique homes, was inspired by the Rey's journey and philosophy of living. She felt a kinship with the married authors of German/Jewish descent who were also multinationals having made homes in Lisbon, Brazil, Paris and ultimately New York City. With immigration and refugee crises at the center of current and urgent international debate, Monkey Business reminds us that we are all world citizens,  searching for and deserving of a home. The Reys were drawn to Waterville Valley in New Hampshire  because Hans was revising his popular astronomy book The Stars and needed a place away from the glare of city lights to do observation. They quickly fell in love with the valley and spent the next twenty summers there, writing, drawing, and charming the community.

Hans was a Renaissance man, versed in history and natural history, while Margret was a potter and photographer. Villagers and visitors were drawn to their little home—now known as the Curious George Cottage—which soon became an intellectual center for the town, hosting book clubs, discussion groups, and best of all, the magical opportunity to watch a children's author at work. When the "author at work" sign was out, children would come and watch as he drew new adventures for George or his other characters. At other times, Hans would take the children on nature walks and delight them with his talent of throwing his voice.

Today, the spirit of curiosity and exploration lives on in the Margret and H.A Rey Center, whose mission is to honor the Rey's legacy by recreating the experiences they provided: nature walks, literary groups, writers workshops, discussion clubs, a monthly lecture series, art shows, and of course, activities for children. The Curious Kids program takes children and families into the White Mountain National Forest around surrounding Waterville Valley for learning experiences. 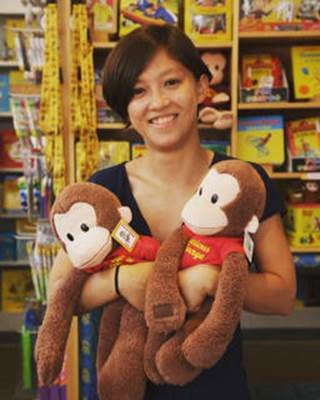 To fund the postproduction costs of Monkey Business , Yamazaki is running an ambitious Kickstarter campaign , releasing timeless original Curious George prints and digital archive downloads as rewards . The Kickstarter is also intended to be an invitation to the world community to find inspiration in Hans and Margret Rey’s story. How curiosity & imagination gave them the power to overcome life’s greatest challenges. The link to the Kickstarter, which includes personal testimony by Yamazaki about the making of the film, can be found here: bit.ly/CuriousGeorgeDoc