The Great North Woods, or Bois du Nord as the French Canadians call it, is just that—great and north. It comprises nearly the entire northern third of the state. This land is nearly all forests and is part of the largest contiguously forested expanses left in the United States. From the 1820s to the Civil War, this region produced more timber than anywhere in the world did.

While the vast forest dominates the landscape, it is also dotted with historic covered bridges, lined with rushing streams, criss-crossed with miles of hiking and snowmobiling trails, populated by an abundance of wildlife and peopled with the French-Canadians who immigrated to this area to help log the forests and work in the paper mills.

Much of this region remains a true wilderness. As such, it is a haven for wildlife enthusiasts, snowmobilers, cross-country skiers, birders, serious fishermen and hunters, campers, hikers, kayakers and canoeists. The Great North Woods is a place to hear what true quiet really sounds like and to see a how bright the night sky, far from the ambient light of cities, can truly be.   You won’t find discos or dancehalls nearby. Nightlife in the Great North Woods involves listening to an owl hooting, counting the stars, or telling tales around a campfire. 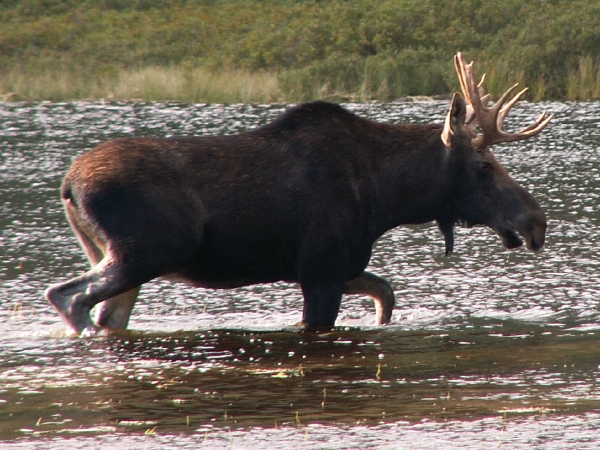 Because the forests here are a mixture of northern hardwoods and evergreens such as spruce and balsam fir, the area is rich in wildlife and is home to 25 species that are unique to the region.   It is the nesting grounds for many of the Northern Hemisphere’s songbirds. Remote Lake Umbagog, a national wildlife refuge, welcomed the return of bald eagles in 1988 and is home to several nesting pairs now, along with loons and osprey. Moose are nearly as abundant as the trees and in the Great North Woods; you can drive “Moose Alley”north of Pittsburgh or hop on a Moose Tour in Groom to catch sight of this magnificent creature.

The Great North Woods are at the far side of Mount Washington, which is ever in view along with some breath-taking scenes of The Presidentials (Mounts Adams, Madison, Monroe and more), which preside over this area. During fall foliage season, every drive through the Great North Woods region is a scenic drive.

For family fishing and wildlife expeditions, it can’t really get more wild than Lake Umbagog, a federal wildlife preserve. Spot bald eagles and numerous other species and ply the quiet waters along with the loons.

Pinkham's Grant located on Route 16, is a great base of operations for year-round activities including hiking, camping, and cross-country and downhill skiing. For wilderness adventurers, Pinkham Notch Camp offers June to September hiking and camping at eight AMC huts in the White Mountains. Here, hikers can eat home cooked

The Androscoggin River has numerous access points from the dam in Errol to the Nansen Wayside Area in Berlin. Use them to begin a canoeing, fishing or kayaking trip. Fishing can be very productive throughout the summer season.

Fly-fisherman flock to the Errol Bridge on Route 26, and it is an excellent place to put in a canoe.

RIDING THE HILLS—WINTER AND SUMMER

Between Jackson and Gorham

This ski area, located on national forest land, is also an excellent family adventure for summer with its Wildcat Express, the highest gondola ride in the state. From here you can also hike, fish a stocked pond, or enjoy make-your-own ice cream sundaes. In winter, the ski area is said to have the most natural snowfall and the longest season, and it takes only six minutes to get to the 4,062-foot summit.

This ravine at the timberline of Mount Washington is popular with hikers, but is world renowned for its rugged spring skiing (not for beginners!). The Appalachian Mountain Club maintains trails.

A four-season activity center located at the base of Mt. Washington in Pinkham Notch.

You could say that moose are the trademark of the Great North Woods. They are simply everywhere, especially in the spring and fall migrating and mating months. Each August, the North Woods towns of Pittsburg and Colebrook join with their Vermont neighbors to celebrate them, at the North Country Moose Festival. You can drive Moose Alley, on Route 3 north of Pittsburg, or in Gorham you can hop on a moose spotting tour. North of Errol, the route known as Thirteen Mile Woods is a moose magnet, and many hang out on Route 26 through Dixville Notch. Whether on your own or in a tour, moose are easy to spot, but use caution always. Moose are so big they are not afraid of you or your car. They may appear friendly, but they are unpredictable.

Simply put, every drive through the North Woods is spectacular in the fall. From mid-September through late October, the area explodes gradually, but it has the added benefit of being without the usual crowds of fall in New England. Drive Route 26 from the town of Errol to the Maine border and you’ll see Mount Washington and the presidential mountain range in one sweeping view. Along Route 16 in the Thirteen Mile Woods, the brilliant foliage is reflected in the waters of the Androscoggin River. Along Route 3 north of Colebrook towards Canada, the fall scene is of orchards, farms and rolling hills turning for the season.

The Heritage Center seeks to honor the men and women who settled this wilderness and made it into one of the greatest paper-producing cities in the world. The center hosts logging, and arm wrestling competitions, ethnic festivals, educational programs and a restored, authentic logging camp. Special programs explore the cultural heritage (French-Canadian, Russian, Greek, Scandinavian, Italian) of the workers, as well as the first inhabitants, the Abenaki Native American tribe. Open: Year-round, seasonal events.

With rides like the Yule Log Flume and Rudy’s (as in Rudolph) Rapid Transit roller coaster, children can be worked into a Christmas-like frenzy even in the middle of summer. This theme park offers a taste of the Yuletide during all seasons, with special events in November and December.

Owned by the Society for the Protection of New Hampshire Forests, this estate offers educational programs about the forest and maple syruping, as well as offering hiking trails, wagon rides, and the opportunity to cut your own Christmas trees. The Rocks has package deals with area inns, so inquire about those.

Ascend Mount Washington in your own vehicle or take a van with a professionally narrated tour. At the top, walk through the Summit Stage Office and learn about weather at the Mount Washington Observatory, where the world’s fastest winds have been recorded. The Sherman Adams State Park Building and the Tip Top House (once an inn) can be explored.

THE TOWNS OF THE NORTH WOODS

Berlin is a struggling company town, with the fate of its paper mills rising and falling in recent years. However, the ethnic groups that made up the mills’workforce in the late 1800s today provide the city with a diverse character you won’t find elsewhere in New Hampshire. The French-Canadian accent and influence are everywhere. Scandinavians have their own neighborhood and market. The Russians erected a domed, Orthodox Church that towers over the city, and Italian immigrants helped build the architecturally extravagant wonder of St. Anne’s Catholic Church in the downtown area.

In Berlin, this Community Center brings name-brand entertainment, year-round to city residents and visitors. You might find an opera company, the New Hampshire Symphony Orchestra, an Irish tenor, or a tribute to the Beatles happening here.

Located within Berlin city limits at the end of Willard St., Mount Jasper is an archeological site of a prehistoric mine used by Native Americans. Many of its artifacts are on display at the Berlin Public Library.

This town is the gateway to driving up to Mount Washington and is filled with numerous gift shops and quality restaurants.

The town of Shelburne is a forested beauty. One of the most striking displays is the Shelburne Birches, a stand of white birches planted as a memorial to veterans and located on Route 2 in Shelburne.