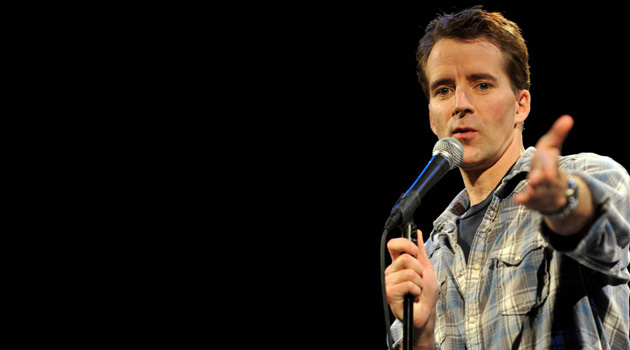 Juston grew up in Maine but now makes his home in New Hampshire. Performing standup for more than 15 years, McKinney has appeared on a half dozen Comedy Central specials, including a half-hour Comedy Central Presents feature, and most recently in his 1-hour special Juston McKinney: A Middle Class Hole, which was released by Warner Bros. on CD and DVD. Juston has appeared numerous times on The Tonight Show with Jay Leno, Conan O’Brien, and he was chosen to be a part of Comedy Central’s Blue Collar Comedy Next Generation Tour with Bill Engval, airing on TBS. Juston has also hosted his own radio program on Sirius/XM radio, Live from the Woods with Juston McKinney.

It’s a weekend for Waterville Valley Resort that will also feature a Starry Nights dinner and fireworks in Town Square. Starry Nights is a unique dining experience where guests can enjoy a gourmet meal with drinks and entertainment right on the mountain, followed by a torchlight ski down to the base. Tickets are $125 and reservations can be made by calling 603-236-8311 ext. 3000.

Waterville Valley was designed and planned specifically as a self-contained four seasons resort. Known as New Hampshire’s Family resort, it features 220 skiable acres with an altitude of 4,004 feet and vertical drop of 2,020 feet, 50 trails, and 11 lifts.  Lodging options include country inns, condominiums and all-suite hotels. For more information, call 1-800-GO-VALLEY or visit www.waterville.com.

Tags: 2015 at 7pm. Tickets are $18 and are available for purchase through watervillle.com., Headlining an event filled MLK weekend Waterville Valley Resort is comedian Juston McKinney. He’ll be performing at the Waterville Valley Conference Center on January 18